Five-rider line-up set to compete on latest FC RE machinery. 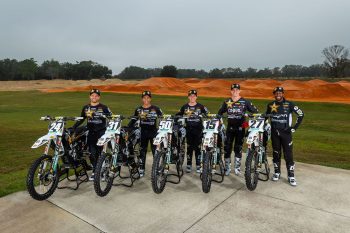 Off the back of a successful 2021 Supercross season – a podium finish and four top-fives – Stewart will compete in both indoor and outdoor championships in 2022, equipped with the FC 450 RE.

“I feel really good,” Stewart stated. “We’ve been doing a lot of training and we’ve got the bike really dialled in, so we’re looking forward to going into A1 and the 2022 season.

“It’s going to be a good year for me. I know I ended really good last year for the last couple of rounds but now obviously we’re on a new team and feeling better, I like the whole vibe here. All we can do is go out there, have fun and do what we can do!”

Joining him in the 450 ranks is Wilson, who enters his sixth season with the team, looking to complete a healthy 2022 season after his most recent 2021 campaign was plagued with an ongoing illness.

Spearheading the team’s assault in the 250 division is RJ Hampshire, the multi-time race winner looking to land an elusive professional national championship with the help of the 2022 FC 250 RE.

“I’m feeling good heading into the new season,” Hampshire explained. “We’ve had a good off-season so far and the bike is awesome, so we have a lot of things to look forward to. We’re starting fresh and just excited to be with the team for another year and build on what we’ve started the last couple years.”

Swoll enters the upcoming season off the back of a breakout 2021, claiming second place at Arlington SX and securing his first career overall win in Pro Motocross at the High Point national. For Supercross, he will compete in 250SX West for 2022.

Robinson will enter his sophomore season with the team and will look to build on a mixed rookie professional 250 season impacted with illness and injury, where he still managed to finish second at the Daytona Supercross in 2021.

Rockstar Husqvarna Factory Racing team manager Stephen Westfall added: “I feel really good heading into the 2022 season. The team is solid and we have an all-new bike for both the 450 and 250. We have a really solid base and I think we will continue to get better throughout the year.

“The team is working hard, we’ve got a good group down in Florida all training together and pushing each and every day. We’ll continue to improve and we’re looking forward to the results this year.”