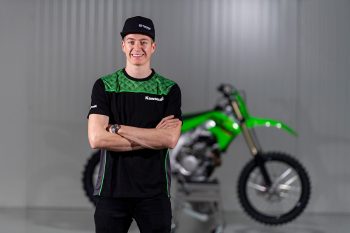 Ben Watson has been confirmed to switch to the Kawasaki Racing Team, recently departing Monster Energy Yamaha to join Romain Febvre in the squad’s MXGP roster for 2022.

Watson, 24, completed his rookie MXGP season this year, finishing 11th in the championship standings with his best moto result being sixth achieved in The Netherlands and Trentino.

Prior to his step to the premier class, the Watson scored multiple GP victories in MX2 and will be looking to build towards race-winning ways in the fresh outfit for 2022, showing 450 class potential by winning a gold medal at this year’s Motocross of Nations (MXoN).

“I’m really looking forward to this fresh start,” Watson explained. “I’ve been with another couple of brands almost all my life and Kawasaki is one I’ve never ridden before, so to have this fresh start with new colours is definitely something I need at this stage of my career.

“I’ve had some ups-and-downs during my MXGP rookie season this year but I think I proved on numerous occasions like the Nations and several other GPs that I have what it takes to race upfront. I was just missing a few things but I’m joining a group of guys and a bike I really believe will help me.

“I’m really excited to put my leg over the KX450-SR. The plan is to get used to the bike before Christmas, to get a feeling for the handling, the power delivery and sort out a few small things like seat height, the position of the bars and so on.

“I’m looking forward to working with Romain and all the team and I think this is exactly what I need as a package to make the next step. It’s going to be a tough couple of months leading up to the opening GP at Matterley in February but wow, what a start to my Kawasaki career at the home GP with all the British fans cheering me on!”

Watson takes the place of Ivo Monticelli, who had a difficult 2021 campaign, forced to sit out the second half of the season due to complications surrounding a dislocated shoulder sustained in Belgium.

Kawasaki Motors Europe Racing manager Steve Guttridge added: “It was a tough decision-making process to work through along with the project leaders in Japan regarding whom should finally take the second seat inside our factory MXGP team.

“We have a clear focus on Romain to challenge for the title, but the future arrives fast and a younger teammate who can grow into the MXGP programme is very important also. The duo already have a close relationship as they have often trained together in the past.

“Ben has already experienced a solid rookie season in the MXGP class which takes a big extra learning curve for riders coming up from MX2 to succeed within these days. Inside the Kawasaki Racing Team we believe the staff can help Ben make that step in his career in 2022.”

The 2022 MXGP season kicks off at Matterley Basin on 20 February, round one of the scheduled 20-round championship.