Frenchman dominant at home as Soubeyras and Brayton podium. 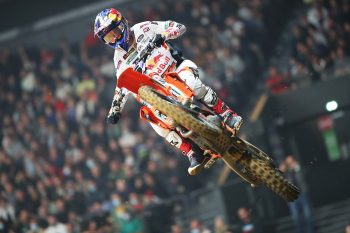 Red Bull KTM Factory Racing’s Marvin Musquin won all three main events in the return of the Paris Supercross, crowned ‘King of Paris’ for a third time in his career.

After qualifying quickest and topping Superpole, Musquin won all three main events on Saturday night in the annual French event at the La Defense Arena.

Musquin controlled the first two sprints and then took out the final outing, riding his 450 SX-F to a 1-1-1 streak to win the overall ahead of Husqvarna-mounted Cedric Soubeyras with 3-2-2 finishes.

“King of Paris 2021, that was obviously the goal and I came here well prepared as we are getting closer to the new Supercross season in January,” Musquin reflected. “This event is always a good training for me, although it was different this year as the track had no whoops.

“It was fun anyway and the soil was choppy, it was still challenging. I wanted to get holeshots, be at the front and keep pushing to the end. I’m happy… It was a one-day format this time, but I enjoyed it and went 1-2 with my buddy Cedric Soubeyras – two Frenchies! That was pretty amazing.”

Completing the podium on the tamed-down layout was first of the Americans Justin Brayton (Smartop Bullfrog Spas MCR Honda), who went 2-3-4 in the trio of finals. He was ahead of Justin Bogle (Twisted Tea Suzuki) and KTM-equipped Chad Reed out of retirement for 6-5-7 results.

MXGP contender Romain Febvre (Kawasaki Racing Team) was third in Superpole and charged from a bad start to fifth in the first sprint, but crashed heavily in the second outing while trailing Musquin in P2.

Retiring grand prix great Antonio Cairoli (Red Bull KTM Factory Racing) also impressed, going second in Superpole and then 17-6-3 in the finals for seventh overall. He made an aggressive move on Brayton for position in the final encounter.

American Arenacross champion Kyle Peters (Phoenix Racing Honda) was too strong in SX2, dominating the evening despite new MX2 world champion Maxime Renaux (Monster Energy Yamaha) holding the advantage in terms of single-lap pace through much of the weekend.