With a heavily updated structure for the 2022 season, Team Rocky Mountain ATV/MC KTM WPS manager Forrest Butler is looking to continue the charge towards the front with a rejuvenated line-up of Max Anstie and Shane McElrath, as well as the returning Joey Savatgy. In this latest Industry interview from the team’s launch, Butler outlines the benefits of the new dynamic within the team which includes three managers, taking suspension and engine development in-house, navigating the challenge of the pandemic and the split with Blake Baggett at the end of last year. Good. Michael Byrne has been with us a long time, but now he’s moved on and will do more in the team’s training department. Now with us, we’ve kind of taken advantage of that to get a little more diverse, so we actually have three team managers this year. We are kind of splitting up the departments because racing growing, the team’s growing, everything is getting bigger trying to climb that ladder. We have an operations manager, Dylan Rash, who has been with the team for four or five years now and worked his way up through the tech side – he’s just a great guy handling everything operations wise, logistics wise. On the technical side, which is crew chief to some people -technical manager – so pretty much everything that has to do with the bike, that’s Derek Rankin. Rankin was a mechanic with the team for five years. The third part, the unique part is that we have an athlete manager now, so we hired Seth Rarick. Seth was with Star this past year as the 250 team manager. I know Seth has a background and passion in training and we started talking as we were looking for team trainers and it’s something different for me, I’m always looking for a dynamic as it’s tough to find personalities that match and we just hit it off on so many points. Athlete manager, I think it’s something new to our sport and it’s got that title because that’s what he is – it’s not just the training part, there are so many elements that go with the rider. With our guys, there’s such a mental side, and it all ties into the athlete manager.

Another big announcement is that you have a new partner with the team. What can you tell us about that?

Really excited to talk about this one, finally, as there have been a lot of rumors out there regarding an investor and sponsor and things like that. No, it’s an official partner, Mark Mackenzie. I’m proud to finally announce and say that I have a 50/50 partner now and BBMX, which is the race corporation behind the race team – this is what we are going to do going into our 19th year. With that said, I have been looking for a partner for some years now and we are up against a lot, up against the factory and we are kind of yin and yang to each other, which is great. He brings stuff to the table that helps me and the team, while I bring stuff to him that will be much different from him just coming in and wanting to start a team. It’s got a unique dynamic.

On top of that, we’ve got to talk about riders now, we’ve got Joey coming back and you’ve got two new riders. How did that work out?

Joey, I’ve just got to give him props, first year with the team, tough year, post-covid year… Joey hadn’t ridden Supercross the year before that, but he came out, top 10 overall in the Supercross championship. Outdoors, same thing, that was a no-brainer, he earned his stripes and we definitely both feel like he can do a lot better. Then the new guys, Shane is someone I always watched and admired from the 250 days and knew he could ride a 450 from his amateur days, and it has just been one of those wait and see what this guy could do. Last year he got on a 450 and got injured, unfortunately, then he was Supercross-only. He loves KTM, KTM loves him and a lot of our sponsors, he’s Trey Canard 2.0 – he’s just such a good guy. He’s fast, even though he got to show up for a couple of races, I think the first race back he posted fastest qualifying time and second overall on the night, those are types of things that we look for. You’ve got to look at everything, but there are certain things that you can’t fake and, with him, speed is one of them. With Max, never worked with someone like Max that’s from Europe and has experience on the GP circuit. In his prime, Max raced here when he was 16, 17 in the 250 class, and had some good results and everything, but at that young age, I don’t know what his story was, but he went back and had a GP career – a successful one with a lot of factory teams. He’s got a MXoN title. It’s just good, he’s got a personality when he talks and he does have Supercross experience from the past. He’s gotten his feet wet these last two years and outdoors I think he has got speed to show what he can do. He’s ridden a KTM and was on a Husky for a while overseas, so he is really familiar with the bike.

In 2022, will the expectation be different for Max compared to Shane and Joey, knowing they have so much more experience in Supercross, or does Max feel like on the bike with the right training and everything else he can jump up there and be a top 10 guy?

In being very respectful to past teams, teams where he has come from and that’s the best part about Max he’s very respectful, and everyone is always looking to move around and find people who they are going to work with, and I think with Max getting to work with Joey and Shane and the over guys at the compound, is just something that he really wants to do. There’s a family fit, too – him and his wife and some of the other wives, it all just kind of ties in. With that, expectations I would say, just to be flat straight expectations, Supercross, we want to be top five. We were a top five team this year, Joey was on the bubble. Max is still a top 10 guy, I think he can be there and he has proven that he can be there. Outdoors I think it is going to swing, people are really going to be looking at Max to pour it on our bike, our team, it’s going to be a cool year. 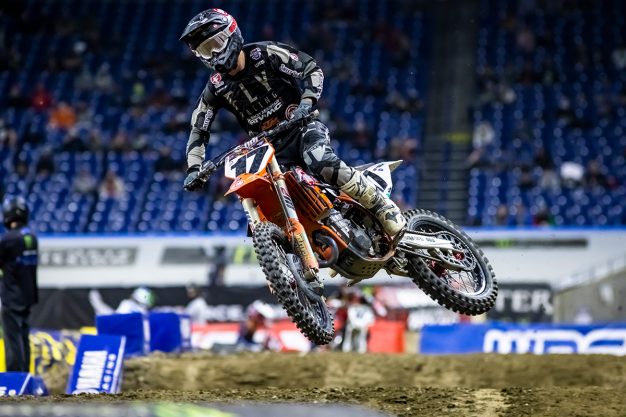 While we are talking riders, I’ve got to ask the question. Blake Baggett, he was contracted to ride for 2021, we never saw he on a bike and there was a lot of rumors floating around there. The most common thing we heard is that there was a lawsuit over money between you and Blake… Is that true?

So when you say lack of info to the media and fans, can you expand on that a little bit and look, bottom line, was Blake Bagget paid what he was contracted to get?

What’s so tough is, covid in 2020 was so hard on the industry as a whole, I mean the world as a whole, and just boxing it back down into our industry, we just had so much go on – there’s no fans, when there’s no fans, there’s no fans. I think that was just one thing going on, when there’s no fans you’ve got sponsors falling out left and right, you don’t know what’s coming or when you are going to race. I can’t talk about money and riders and sponsors directly, what can I say is we took a haircut, the team took a haircut and staff. Tapping back in on your question about what I meant by lack of info to the media, I just mean in general – all teams in general – I think covid got tight, the year got tight, no-one really knew what to say, you had teams drop out, things like that. I think that’s just something in the future that both teams, the media, riders, we can all work together better, to where there’s not so much finger-pointing at the end of the day. The fans do have a right to know what’s going on out there. That’s what I meant by that.

Last question on this subject, just to put it to bed, how did things end between the team and Blake?

I honestly can say, we parted ways amicably.

We talked about some big changes for 2022. You guys are doing your own engines now and suspension, is what we are told?

Yeah, there’s a lot of rumors out there, but this is our official announcement on what we are really doing, we’ve also renewed with KTM and KTM North America for two years through 2023 also. It’s going to be pretty cool, this year will be our 10th anniversary with KTM on the factory program, so it will be years 10 and 11 with them. In that program we kind of going on a mold of being a little bit more independent in our growth. It’s a case of KTM, Husky and GasGas growing, the program is getting big. With that, we were just kind of ready to take a direction, what they provide for us is unreal, again, they are juggling a lot of teams now. For us, it was really just a question, can we take over managing our own suspension and motor programs, we have a protocol to follow in there, at the end of the day we all want to do a great job and finish on the top, not go backwards. So yes, we are, we are going to be doing suspension and motors, but its not as crazy as people think. Suspension will still be through factory WP, we will still be on WP works parts, we will be working with some of our old techs that we used to work within the team. We are really excited about that, we are responsible for our own suspension would be a better way to term it this year.

So it’s not that KTM is saying you can’t have this or this, they are allowing the team to have what you would normally get, it’s just that you guys manage it on your end?

First, it’s important for everyone to know that yes we are still KTM, we are KTM orange, everything is the same – contracts, pits, full KTM support team and all of that. This is – what I think is best – we get to show what the bikes really can do now so people don’t have an outside perspective of ‘they are on a factory bike too, what they are doing is because they are on a factory bike, but I still can’t get that bike’. No, we are going more independent to show you our bike, this is the bike, we are going to do our suspension and our engine, so like Mitch Payton in Pro Circuit, they’ve been around for so long if you think about it… Mitch is Kawasaki’s factory 250 program, but who does there suspension? So it’s kind of like that. Unfortunately, Geico is gone, but if you knew Geico then it’s the same thing, the factory support, but they got to do their own deal. Star, I mean that’s the team right now, right? Star pulled that over into the 450 class and JGR did that before – they aren’t here anymore – but that’s the model, that’s where I feel we all need to go to grow. There’s only going to be an OEM team if that’s all we leave it at.