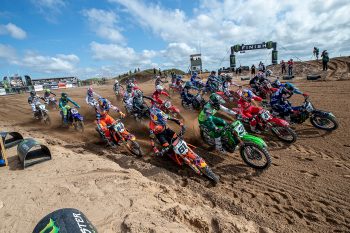 Infront Moto Racing has released the 2022 MXGP World Championship calendar, set for 20 rounds spanning from the middle of February to mid-September.

While last year’s championship was European-only due to travel restrictions, the newly-announced season is currently due to have three fly-away rounds – one in Argentina and two in Indonesia.

Venues such as Matterley Basin, Oss, Pietramurata, Kegums, Orlyonok, Riola Sardo, intu Xanadu-Arroyomolinos, Teutschenthal and Afyonkarahisar will again be on the 2022 calendar, with the return Ernee and St. Jean d’Angely in France and Uddevalla in Sweden.

Opening the series is the MXGP of Great Britain on 19-20 February, followed by the MXGP of Argentina, with the next confirmed round being the MXGP of The Netherlands on 27 March.

After the opening four rounds, the championship will head to the MXGP of Trentino, then Latvis, MFR, Sardegna and Spain before the MXGP of France. Following the event at Ernee, the series moves to the MXGP of Germany before heading overseas again to Indonesia, for the Jakarta and Indonesian GPs in rounds 12 and 13.

The series then returns to Europe for the MXGP of Czech Republic on 17 July, before heading to Flanders in Belgium and then Sweden after a two-year break.

Making its highly anticipated debut, the Iitti-KymiRing venue will host the MXGP of Finland – round 17 – before the championship travels back to France for the MXGP of Charente Maritime.

The MXGP of Turkey marks the penultimate round, while the season-concluding venue remains TBA, expected to be announced shortly. EMX 125, 250, Open and WMX will return at select Europen rounds.

Also announced, the Motocross of Nations (MXoN) will be held on 25 September at RedBud, USA, three weeks after the MXGP season finale.