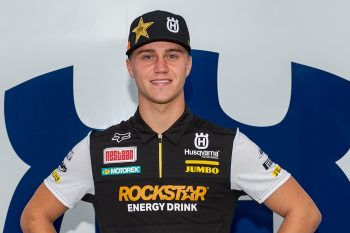 Van De Moosdijk, 21, will make the switch from the F&H Kawasaki team to FC 250 machinery off the back of an injury-shortened 2021 MX2 campaign.

Prior to breaking his scaphoid at the MXGP of Czech Republic, Van De Moosdijk claimed three third-place moto finishes and was fifth in the 2021 MX2 championship after four rounds – set to be his breakout year after a strong 2020 rookie campaign in the category.

The 2019 EMX250 champion is now fully healed and looks ahead to the opportunity of joining the factory Husqvarna squad for the 2022 and 2023 seasons.

“This season has been tough, but I’m putting that behind me and looking forward to working with the team and having Kay as my new teammate.

“I have a really good feeling about things, and I know that at the start of this season things were going well, and that my speed and fitness was where it needed to be to challenge for the podium.

“I’ll have the best bike and the best support next year, so I just want to keep working and improving through the winter and get back to where I was and then give 2022 everything I have.

“Finally, it looks like the season will be back to normal, and I’m really looking forward to that. I want to say thanks to everyone that has made this happen – I can’t wait to get onto my new bike and to start our winter testing and training.”

Van De Moosdijk will join current Rockstar Energy Husqvarna rider Kay De Wolf to complete the team’s MX2 line in 2022, with the future of aged-out Jed Beaton yet to be announced.