No regrets for vice-champion after moto two charge. 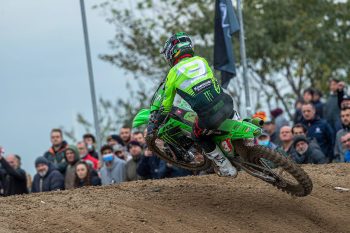 A nail-biting MXGP finale at Mantova saw Romain Febvre finish the 2021 series runner-up, the Frenchman stating ‘it’s a hard way to lose but I gave it my all’ after his spirited charge was ultimately brought to an end by a crash in the second moto.

The Monster Energy Kawasaki rider entered the last race of the season level on points with Jeffrey Herlings after he finished second behind the Dutchman in the opening race.

While chasing Herlings in the second outing, Febvre found unexpected traction on corner exit, causing him to loop out his machine and crash. Remounting and finishing third was enough to secure the championship runner-up position behind Herlings, however, he was left disappointed with the end result.

“To fall that close is really tough,” Febvre explained.”I gave my best so I have no regrets, but it wasn’t quite enough to take the title.”

“Right now I feel a little mad with myself for sure but that’s racing: it’s a hard way to lose but I gave my all. At the moment it’s really tough but I will get through it and be back to battle for the title for Kawasaki again next year.”

Febvre was a model of consistency in 2021, achieving six race victories, 21 podium finishes and scoring points in each of the 36 races – finishing outside the top 10 only once.

2022 will provide another opportunity for the 2015 world champion to claim a second premier class title, the series set to return to a two-day format for the first time since the beginning of the pandemic.