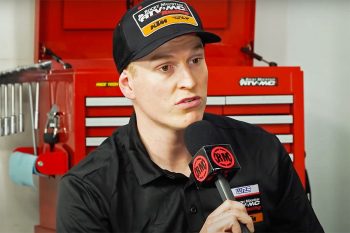 It became evident during the final portion of the outdoors that Anstie was heading to the Florida-based effort after departing HEP Motorsports Suzuki.

Anstie’s return to the 450 SX-F sets up a familiar platform for him to continue his rise in Monster Energy AMA Supercross and Lucas Oil Pro Motocross following a strong MXGP career with the KTM Group.

“I did everything that I could to make this deal happen,” Anstie said. “Coming over from Europe, the last couple of years it’s been fine, but I didn’t come here to make up the numbers – I came here to race and perform.

“I feel like these guys with the set-up moving forward for next year is going to be great. Just being able to be around the best guys and on the championship-winning bike from last year in Supercross, for me, I just want to elevate myself and do whatever I could to put myself in a position to do that. I’m thankful for the opportunity.”

McElrath was confirmed to be joining Team RMATVMC in August for what will be his second term in 450SX, also returning to the outdoors, while Savatgy too has re-signed with the team. Justin Bogle has effectively switched with Anstie, joining Twisted Tea Suzuki.