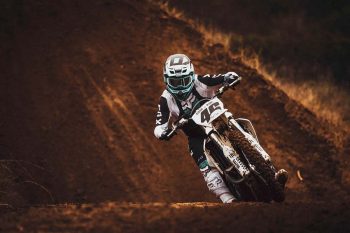 Hart’s impact on the motorcycle industry spans decades. He is perhaps most known for being the first person to complete a backflip aboard a dirt bike 21 years ago, which helped push the sport of freestyle motocross into the mainstream. Upon his retirement from competition, Hart transitioned into race team ownership, where he, partner Ricky Carmichael, and rider Ken Roczen captured the 2016 AMA Pro Motocross Championship under the RCH Racing banner. Hart’s influence crossed over from off-road and into the hugely popular cruiser segment when he became an ambassador for Indian Motorcycles and introduced his popular philanthropic organization, The Good Ride.

Perhaps most importantly, Hart is a loving husband and devoted father to two children. Family serves as the cornerstone of all Hart’s endeavors and also serves as the foundation of his ambassadorship with Mips, where together this newfound partnership will aim to raise awareness around head protection and encourage the utilization of added safety in helmets.

“’Protect yourself, protect your family’ is a guiding principle that motivated me to get more involved with head protection and helmet safety,” said Hart. “As a freestyle competitor, racer, and lifelong rider, I know first hand that your choice of helmet can be a life-changing decision. Mips has invested more than two decades of research into its technology and continues to make improvements to its patented safety system. The peace of mind and increased level of trust I feel whenever I strap on a Fox or Bell helmet equipped with Mips’ technology is something I hope all riders take advantage of, and I’ve made the commitment to put my wife and kids in helmets that only feature the yellow dot. If it’s good enough for me then I know it’s what’s best for them.”

With a talent-rich collection of ambassadors from a diverse range of backgrounds and sporting disciplines, Mips continues to grow as a global force of helmet safety advocacy. Its core mission is to use the voice and influence of the most prominent and successful athletes from around the world to raise head protection awareness and lead the world towards the utilization of safer helmets. Each athlete is invested in using their own experiences to encourage all people, regardless of age, skill level, or preferred sport, to make the right decision when purchasing helmets.

To learn more about the innovation behind Mips please visit mipsprotection.com.