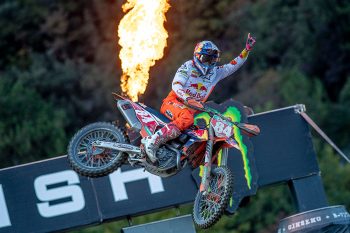 Jeffrey Herlings achieved a perfect 1-1 scorecard at the MXGP of Trentino, tightening his grip on the red plate with a 24 point advantage, as Tom Vialle scored a double victory in MX2 making it a dominant day for Red Bull KTM Factory Racing.

Jeremy Seewer (Monster Energy Yamaha Factory MXGP) grabbed the holeshot in moto one and displayed positive signs of recovering from the sickness that plagued much of his season, leading until lap 12.

Herlings made quick work of teammate Jorge Prado to move into second by the end of the first lap, as Romain Febvre (Monster Energy Kawasaki) charged from outside the top five to third.

‘The Bullet’ trailed Seewer for the next 10 laps before pouncing on the Swiss rider, maintaining the lead for the remainder of the race to grab his 11th moto win of the season, Seewer holding on for second ahead of Febvre who finished third. Team Honda HRC’s Tim Gajser was fourth.

Febvre struck early to take lead from Jacobi before the end of the opening lap, with Coldenhoff following the Frenchman through shortly after as Gajser and Herlings continued to charge through the field – up to third and fourth respectively on lap five.

Herlings made his move on Gajser on lap 12 before passing Febvre two laps later as he started to reel in Coldenhoff out front. With three laps remaining the number 84 passed his compatriot, maintaining the lead to take the second moto victory ahead of Coldenhoff and Gajser – the current world champion passing Febvre with five laps to go for P3.

A 1-1 scorecard saw Herlings easily win the round with 50 points, however, there were remarkably four riders tied on 38 points behind him. Awarded on countback Coldenhoff (5-2) was P2 overall ahead of Gajser in third (4-3), Febvre fourth (3-4) with Seewer completing the top five courtesy of 2-5 finishes.

Herlings’ perfect points haul gives him a critical 24 point advantage over Febvre in the championship race, with Gajser a further three points behind the Kawasaki rider with four rounds remaining. 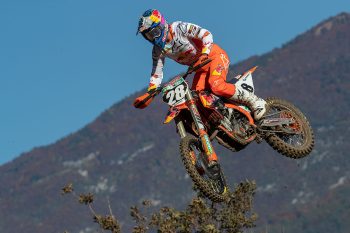 Vialle took the holeshot in the opening moto, leading every lap on route to victory ahead of Jago Geerts (Monster Energy Yamaha Factory MX2).

Completing the rostrum in the first moto was DIGA Process GasGas Factory Racing’s Isak Gifting, nearly holding into second before being relegated to third by Geerts with two laps remaining, ultimately finishing the race in that position and scoring his first MX2 podium of the season.

Race two and again Vialle impressively grabbed the holeshot and lead every lap, crossing the line ahead of Geerts who finished P2 once more, with Australian Jed Beaton (Rockstar Energy Husqvarna) finishing third.

After Renaux’s challenging day notching 6-8 results, he still leads the MX2 world championship by 92 points over Geerts, as Vialle sits a further four points adrift in third as he continues to recover points lost in his absence earlier in the year.

In WMX Courtney Duncan (Bike IT MTX Kawasaki) was crowned 2021 champion, successfully defending her crown and as she achieved a 3-1 scorecard during the final round of the series to claim her third world championship.

Larissa Papenmeier won the round notching 1-2 results, Duncan was P2 and completing the podium was Nancy Van De Ven courtesy of 2-3 finishes.

The MXGP World Championship resumes in just two days time on 27 October for round 15, again at Pietramurata which marks the second of three events at the circuit taking place this week. 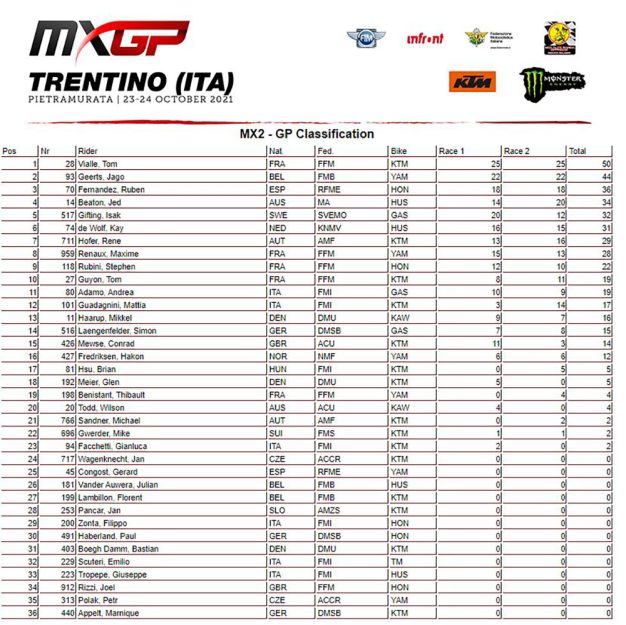