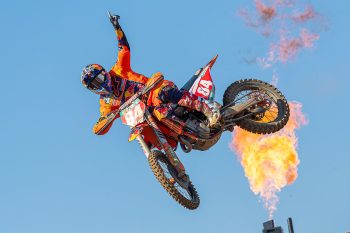 Victory in Spain provided Jeffrey Herlings with a critical advantage in the hotly contested MXGP title race, as a fourth MX2 overall victory in 2021 allowed Maxime Renaux to extend his points lead.

To the delight of the Spanish crowd, Jorge Prado (Red Bull KTM Factory Racing) grabbed the holeshot in moto one followed by Romain Febvre (Monster Energy Kawasaki), with Herlings well outside the top five.

Febvre passed Prado on lap nine to take the lead, as Herlings continued his charge through the field, passing Tim Gajser (Team Honda HRC) in the closing stages for third. The leading trio remained from that point, with Febvre taking his 34th moto victory ahead of Prado and Herlings.

Moto two and Prado again launched to an early lead, while a poor start and early crash from Febvre saw him down in 24th after lap one.

Herlings swiftly passed Gajser for second and trailed his Red Bull KTM Factory Racing teammate Prado until lap 10, where he made a decisive move for victory.

Gajser soon followed through relegating home-hero Prado to third, where he eventually finished the race behind Herlings and the Honda rider. Febvre recovered to seventh.

3-1 results were enough for Herlings to claim the overall, three points ahead of Prado, with Gajser a further two points adrift in P3. Febvre’s poor opening lap in moto two proved costly, finishing P4 for the round, with Tony Cairoli completing the top five with 7-4 finishes.

Herlings’ overall victory sees him lead the championship on 505 points – 12 ahead of Febvre on 493, with Gajser in close pursuit on 490. Prado’s results at round 13 are a positive sign he’s recovering well from injuries sustained in Germany, however faces a tall task to claw back the 65 point deficit to Herlings, currently P4 in the standings. Cairoli is fifth on 419. 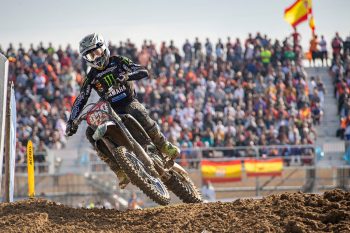 Monster Energy Yamaha MX2 mounted Renaux has one hand on the world championship after 2-1 results allowed the Frenchman to tighten his grip with a 108 point lead.

Tom Vialle (Red Bull KTM Factory Racing) was victorious in the opening moto – claiming his tenth moto win of the season. However, a crash in moto two meant third was the best the 250 SX-F rider could salvage in the second outing, leaving him P2 overall for the round.

Mattia Guadagnini (Red Bull KTM Factory Racing) was fourth overall at Intu Xanadú – Arroyomolinos, with a solid moto one finishing third before some small mistakes in the second race meant the Italian ultimately crossed the line in eighth, while teammate Rene Hofer rounded out the top five overall with 5-6 results.

In WMX, defending champion Courtney Duncan (Bike It MTX Kawasaki) was victorious with a 2-1 scorecard, achieving the round victory on countback ahead of Nancy Van De Ven, with GASGAS mounted Kiara Fontanesi P3 overall courtesy of 3-3 results.

The next stop for the MXGP World Championship is round 14 at Pietramurata, Italy on 24 October, marking the first of three events taking place that week. 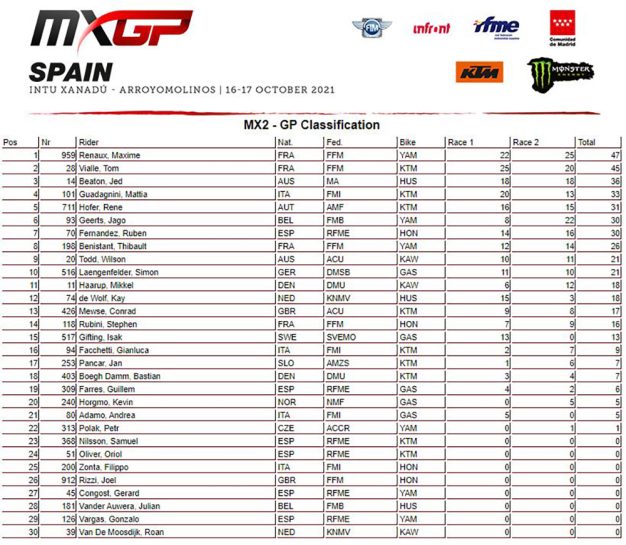