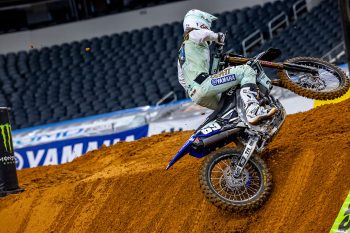 Wageman will be at Team Solitaire for a third-straight year, earning career-best finishes and Monster Energy Supercross and Lucas Oil Pro Motocross in 2021.

“Extending Wageman was a no brainer for us,” stated Team Solitaire’s Chris Elliott. “We love Robbie and the whole Wageman family and that makes it fun to be at the races – we really think that 2022 will be his breakout season.

“It took us a while to decide on a second guy, but what did it for us was Ryan Surratt’s dedication, his great attitude toward riding and, really, just life in general.”

Both Wageman and Surratt have plans to race the 450 class at select rounds with the option of some outdoors upon the completion of the 2022 Supercross season.

In addition to Supercross, the team will enter the ‘2-Stroke MX World Championship’ at Glen Helen Raceway in April with both Wageman in the 250 class and Surratt riding the new YZ125 with Yamaha support.