Finally stepping up to the premier class for 2022 season. 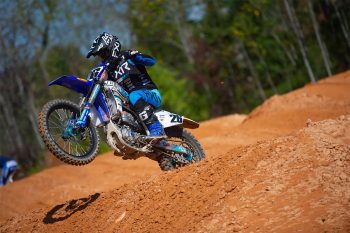 Alex Martin will step up to the 450 class full-time in 2022 after securing a contract with ClubMX on-board Yamaha machinery.

Martin has made it clear in recent months that he’s been working toward moving into the premier class, which he now has the opportunity to do riding the YZ450F.

“Most people may not know this, but I trained at ClubMX from 2010 to 2014 and built a solid foundation for my future there,” Martin explained. “The facility has grown so much since then that I could not ignore the opportunity.

“They have a variety of tracks on the property and have escalated their training program to compete with anyone as they have proven in the last few years.

“They have also managed to build some of the best bikes in the paddock and now with support from Yamaha it can only get better. When Brandon [Haas] called me, I had to listen to his offer and it made perfect sense for me at this point in my career.”

ClubMX will enter a complete Monster Energy AMA Supercross schedule in 2022, led by Martin in 450SX, plus the team has also committed to a full season of Lucas Oil Pro Motocross.

“Adding Alex to the team is a natural extension for our program,” said ClubMX owner Brandon Haas. “He has trained here in the past and is familiar with how we operate – his easygoing attitude and intense work ethic will set the example for the other riders.

“Alex brings a lot to the table, not only with his riding experience, but also with his knowledge of fitness and nutrition. Being able to give him the opportunity to achieve his goal of racing in the 450 class is an added bonus for all of us.”

The addition of Martin at ClubMX sees him line up alongside Phil Nicoletti, Garrett Marchbanks, Jace Owen, Enzo Lopes and Nique Thury next year.

Martin rode for the Manluk Rock River Yamaha Merge Racing team in 2021, but his campaign was largely affected by injury both in Supercross and outdoors. Ongoing wrist dramas ended his year altogether following Unadilla in August.