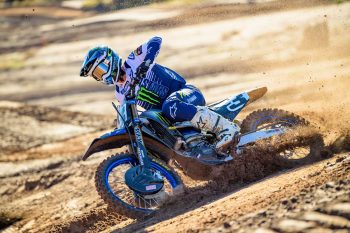 Eli Tomac has said that the Monster Energy Star Racing Yamaha YZ450F is ‘a great base to start with’ as he begins to adapt to new surrounds in preparation for 2022.

Tomac’s switch marks the end of a six-year stint at Kawasaki, experiencing a positive initial outing in blue at his home track in Colorado.

“The team brought me a great base to start with, it was really good right away in a lot of areas – got the thing turning really nice,” Tomac explained.

“The thing is, there’s no lack of power either – it’s a super-fast bike that way, so had to get a little bit used to that and then it was fine-tuning some brake things and some suspension things, so simple little stuff for a first day but also not so bad for the first day. I would say the first day was a success.”

The new Yamaha signing won a multitude of titles in Monster Energy Kawasaki colours – three 450MX championships and a 450SX crown and looks to use the fresh enthusiasm of the Star Racing Yamaha team as a platform to launch to further success.

“It’s a good mix, it’s a good crew,” Tomac added. “It’s a nice refreshing environment and a good motivated environment, so we should be rocking. Our next step is onto the Supercross tracks, they will be full-on, full bore, working at that to try and find the money setting.”

Tomac has just under three months to adapt and build on the Yamaha before the Monster Energy AMA Supercross Championship kicks off at Anaheim on 8 January for round one of the 2022 series.