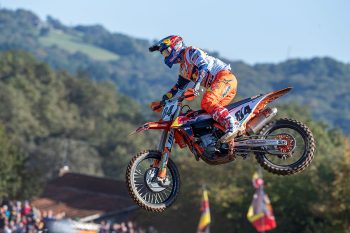 Romain Febvre (Monster Energy Kawasaki) made quick work of  Seewer to move into second by the opening lap, before making a similar pass on Herlings eight laps later to take the lead.

Herlings kept the pressure on Febvre until the end, but the Frenchman was able to hold on to take out the first race victory in front of his home crowd, ahead of Herlings in P2 and Seewer in third.

Tony Cairoli (Red Bull KTM Factory Racing) grabbed the early lead in moto two, followed closely by Herlings and Febvre who both capitalized on mistakes by the Italian to move past.

A battle then ensued between the French and Dutch riders, with ‘the Bullet’ making the decisive move with four laps to go to cross the line victorious and claim the overall win on countback with 2-1 results ahead of Febvre (1-2).

Third place in moto two elevated Tim Gajser to P3 overall after sixth in moto one, however it was not enough for the Slovenian to retain the red plate as he dropped to third in the championship standings.

A sixth in moto two meant Seewer tied for third overall with Gajser on 35 points, however, the Swiss rider finished fourth for the round on countback ahead of Tony Cairoli in fifth scoring 34 points, courtesy of 5-4 results.

Just 10 points separate the top three in the points standings after 12 rounds, Herlings 460, Febvre 454 and Gajser 450. Prado’s injury sustained last round in a mid-air collision with Herlings limited his points haul in France to 14, meaning he now sits 62 points from the red plate in fourth. 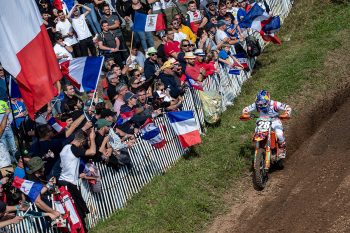 The Frenchman took victory ahead of teammate Mattia Guadagnini, who went 2-3 to maintain third position in the MX2 world championship standings.

Red-plate holder Maxime Renaux (Monster Energy Yamaha Factory MX2) charged through the field in both races notch 4-2 results, landing him third overall for the round and extending his points lead to 91.

Fourth overall was Rockstar Energy Husqvarna’s Jed Beaton, the Australian scoring a podium in moto one in third before finishing sixth in moto two.

The MXGP calendar now heads to intu Xanadú – Arroyomolinos, Spain this weekend on 17 October marking round 13 of the series. 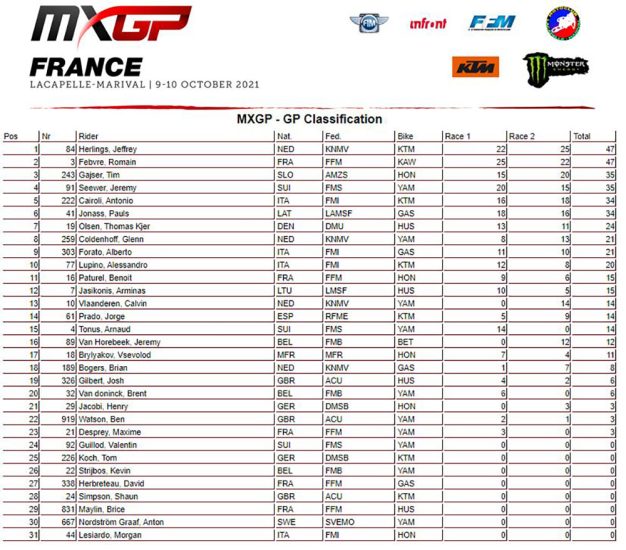 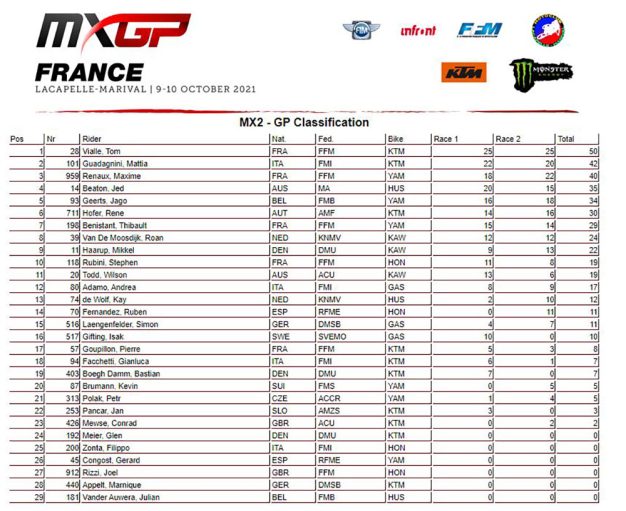