Scheduled to turn professional with Team Honda HRC full-time in 2023. 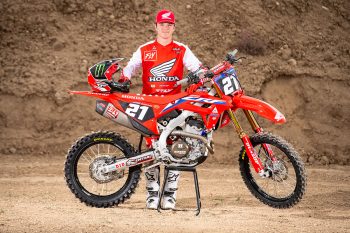 A new Team Honda in-house amateur program has been launched by American Honda, signing teenager Chance Hymas from 2022, then scheduled to join Team Honda HRC as a professional for 2023-2024.

The 16-year-old has taken titles at Spring a Ding Ding and the James Stewart Spring Championship this year, as well as P2 at the AMA Amateur National Motocross Championship and Scouting Moto Combine West.

“I’m very excited to be joining Team Honda and to be a part of such a legit program,” said Hymas. “It’s an honor to be an in-house amateur rider with American Honda and it’s going to be an absolute blast. I’m looking forward to the future and I’m going to make the best of this opportunity!”

Hymas will make his Honda racing debut aboard a CRF250R at a local event this weekend. He’ll also campaign the Motoplayground Race in Ponca City, Oklahoma, and the Mini O’s. Next year will find him taking part in the Supercross Futures series and Amateur National motocross events, as well as the latter part of the AMA Pro Motocross series.

“I’m thrilled to bring Chance to the Honda family,” stated Brandon Wilson, manager of sports and experiential at American Honda. “We already have a strong connection with his family through their dealership and he’s just a great person to work with. We look forward to a long, successful relationship together.”

The signing of Hymas comes as an extension of the in-house Team Honda HRC 250 program formed this year with Jett Lawrence and Hunter Lawrence, introduced following the closure of Geico Honda 12 months ago.