Smith and Pro Circuit to part ways for 2022

Injury-plagued tenure with the team ends after just eight finishes. 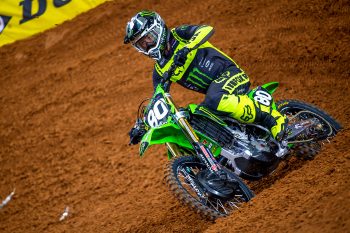 Jordon Smith has confirmed that he and Monster Energy Pro Circuit Kawasaki are parting ways after two seasons.

Smith joined Kawasaki’s factory effort in the support class at the start of the 2020 season after three seasons with TLD Red Bull KTM.

In just his fourth race with the team, Smith sustained an ACL injury that saw him sidelined for the remainder of the Monster Energy Supercross season, and subsequently the entire Lucas Oil Pro Motocross Championship.

Luck did not change in his return to the track in 2021, entering the season with a thumb injury and eventually suffering a season-ending shoulder injury in his heat race at Arlington 3.

After completing just four races in total for the team over the past two seasons, Smith took to Instagram to announce his departure from the team for 2022.

“I want to take a second to say thank you to Mitch Payton and the entire Pro Circuit team,” Smith explained. “It was one of the best opportunities of my life and I’m disappointed that I didn’t get to give it a better shot.

“We worked as hard as we could to make it happen but sometimes that’s just how the cookie crumbles. Thanks to all the sponsors and Kawasaki and Monster Energy!”

While it’s currently unknown where Smith will end up for his return in 2022, we expect to see an announcement tomorrow as teams announce their line-ups for 2022.