Pair to part ways following seven years and a 450SX title together. 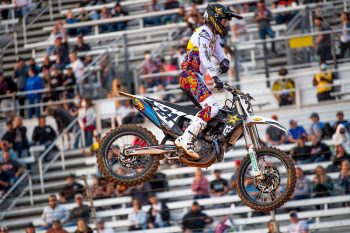 Rockstar Energy Husqvarna has moved to make Jason Anderson’s exit from the factory team official ahead of the 2022 season, expected to be confirmed at Kawasaki this week.

Anderson led the KTM Group brand’s entry for 2015 and delivered the Monster Energy Supercross 450SX championship in the 2018 season.

Following seven years together, the pair will part ways and it’s that expected he will replace Eli Tomac to join Monster Energy Kawasaki alongside Adam Cianciarulo for next year.

“It’s been an honour to have worked with such a talented and committed racer like Jason,” commented Stephen Westfall, Rockstar Energy Husqvarna Factory Racing team manager. “His dedication and talent, together with his willingness to always put the work in, ensured he was always the best rider he could be.

“It’s unfortunate that his time with the team coincides with him being injured as he was showing some great speed early on in the Pro Motocross season. On behalf of Rockstar Energy Husqvarna Factory Racing, I wish Jason well and look forward to seeing him at the races in the future.”

Husqvarna Motorcycles vice president motorsports offroad, Robert Jonas added: “We’ve had a great seven years with Jason and are hugely appreciative of all that he achieved and contributed to Rockstar Energy Husqvarna Factory Racing. The highlight of course was winning the 450SX title in 2018.

During his time with Rockstar Energy Husqvarna, Anderson won seven 450SX main events and claimed 27 podium finishes, in addition to representing Team USA at the Motocross of Nations (MXoN) on two occasions and earning victories in Australia and New Zealand.