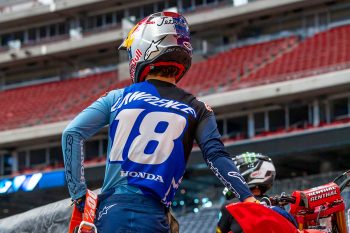 AMA numbers have been announced for the 2022 Monster Energy Supercross and Lucas Oil Pro Motocross season, including a group of new career numbers selected by eligible riders.

It’s been confirmed that new 250MX national champion Jett Lawrence will retain 18 for his career, rather than choosing any of the few single-digit numbers available.

Single digits currently unused include 4, 5 and 8, to continue unused next year. However, despite not racing this year, Chad Reed has retained 22 and Justin Hill the 46 for another term.

In addition to Lawrence opting for 18, which he wore this season on his way to the championship and also being able to use number 1 in 250MX, Colt Nichols scored enough points to earn a career number and he will wear 45 (as well as 1E if he defends his 250SX East title).

Hunter Lawrence was another to earn a career number, selecting 96 – which he used in his GP career – and Jo Shimoda will retain number 30 for his career after also scoring enough points to lock his current number in.

Note that once again, for superstition purposes, no rider will ride with number 13 in Supercross or Pro Motocross for the 2022 season.