Cairoli to line up at home MXoN after escaping injury 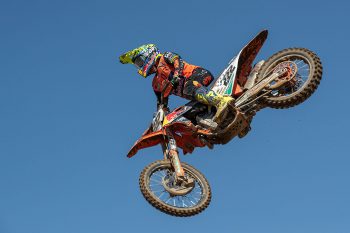 Italian Antonio Cairoli will be fit to start the 2021 Monster Energy Motocross of Nations (MXoN) at Mantova this weekend, overcoming the incident that ruled him out of MXGP in Sardegna on Sunday.

Cairoli, who will retire at the close of the season, was left with pain in his neck and back after a heavy crash in qualifying at Riola Sardo.

That forced him to withdraw from the round and masked his representation at MXoN with uncertainty, however, the nine-time world champion is now set to fly the Italian flag at the prestigious event on home soil. He will enter the MXGP category as he starts MXoN for the final time.