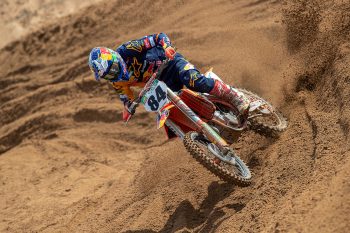 A dominant day for Jeffrey Herlings at the MXGP of Sardegna saw the Dutch rider claim his third-straight premier class win and the red plate, as in MX2 Tom Vialle made it a Red Bull KTM double yet again.

Herlings claimed the holeshot in Moto one to then storm to a commanding victory, winning by over 40 seconds ahead of teammate Jorge Prado (Red Bull KTM Factory Racing) in second.

Moto two saw Prado grab the early lead ahead of Herlings. A battle for the lead then ensued between the two KTM riders, with Herlings eventually finding his way past the Spaniard to make it 1-1 for the day, with Prado finishing P2 overall (2-2) and Romain Febvre (Monster Energy Kawasaki) in third for the round courtesy of 3-3 results.

A strong showing by Calvin Vlaanderen (Geeben Van Venrooy Racing) saw the Yamaha rider achieve a season-best P4 overall finishing fourth in both motos, with Jeremy Seewer (Monster Energy Yamaha) showing an uplift in form to round out the top five with a 6-5 scorecard.

A heavy crash in qualifying ruled the retiring Tony Cairoli (Red Bull KTM Factory Racing) out altogether, unable to start in either moto, but being cleared of any major injuries.

Herlings now leads on 371 points, one point ahead of Gajser on 370, while Febvre is still right in the mix on 367 and Prado is a further eight points back on 359. Cairoli’s zero points haul from the round means he now trails Herlings by 45 points, P5 in the standings. In MX2, defending champion Vialle extended his dominant run of form, claiming both moto victories and the victory as the Red Bull KTM rider continues to claw back points lost from an early-season training crash.

Red Bull KTM-mounted Guadagnini was P3 in the first moto before experiencing a technical issue in moto two, resulting in a costly non-finish.

A consistent day for Kay de Wolf (4-4) saw the Rockstar Energy Husqvarna rider complete the rostrum in third ahead of Monster Energy Yamaha’s Jago Geerts, who recovered from eighth in the first race to finish second in moto two, ending up fourth overall.

Isak Gifting (GasGas Factory Racing) scored a season-best fifth overall to complete the top five, stating his good level of fitness helped him to make the most of the hot and rough day.

The MXGP World Championship now heads to Teutschenthal, Germany, on 3 October, where key MXGP title contenders will be looking to gain an edge and the MX2 field will attempt to halt Vialle’s momentum and claw back points on Renaux.