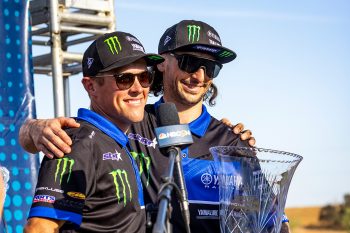 Reflecting on their 450MX championship at the conclusion of the 2021 Pro Motocross season, Monster Energy Star Racing Yamaha’s 450 team manager Jeremy Coker says they ‘had the right guy leading the way’ in their first premier class season.

Taking over Yamaha’s factory effort in both 450MX and 450SX at the start of the 2021 season, Star Racing put its faith in their long time 250 rider Dylan Ferrandis.

After finding incredible success together throughout his 250 career, they dove head first into the project in an attempt to put Yamaha back atop the premier class in America.

Supercross went well, notching multiple podiums with both Ferrandis, Malcolm Stewart and Aaron Plessinger, but when the gate dropped for the Lucas Oil Pro Motocross season, Ferrandis and the team never missed a step all season long.

Crowned champion with a round to spare, they managed to bring Yamaha it’s first premier-class title since Grant Langston in 2008, notching the lofty goal they set for themselves at the onset of the year.

“Coming into the year, we had high expectations and set big goals and wanted the championship, but it’s racing, and we were not sure how it would turn out,” Coker explained. “Our whole team put in the work and had the same vision of winning.

“I knew if we all put our efforts towards those goals and believed in ourselves, we could do it, and we did it. We had the right guy leading the way for the team. No one else has the heart that Dylan has, that want to win, and he proved that today.”

Ferrandis was not shy in saying he was pressuring the team to work hard throughout the year, an attitude that helped lay the groundwork for the championship that now bodes well for the future of the brand.

As for 2022, the rumor mill has all but confirmed Eli Tomac will team up with Ferrandis for 2022 and be swinging his leg over the machine that showed promise in Supercross and dominated the outdoor championship ahead of his arrival.