Assorted racer comments following the 12th round of the season.

In Quotebook, a selection of riders detail how their races played out at round 12 of the 2021 Lucas Oil Pro Motocross Championship at Hangtown. 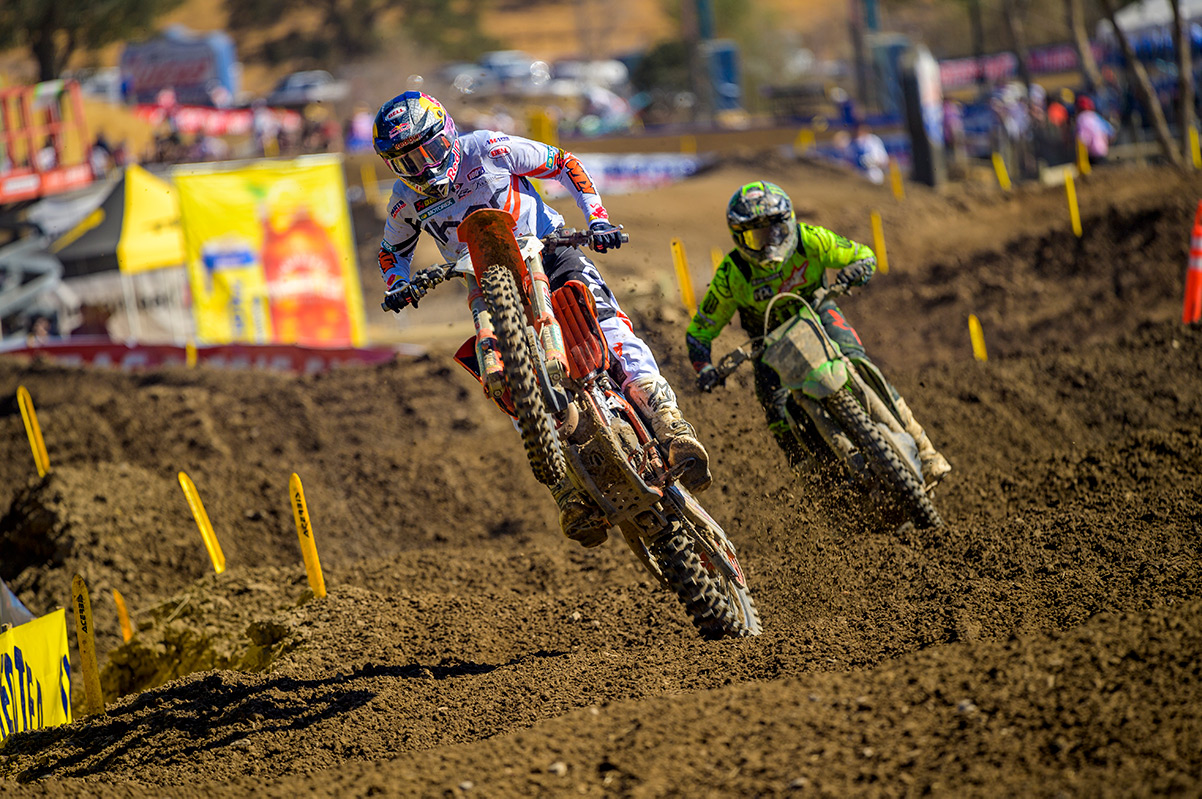 Ken Roczen (Team Honda HRC) – Ninth:
My weekend in Hangtown was super tough. I was good in practice and got off to a good start in the first moto and led for over half of the race before settling for second, scoring some more points on [Eli] Tomac. In the second moto, there was a bunch of carnage going on at the start and my foot got stuck in somebody’s wheel to where I thought my foot was broken. I decided to go back to the mechanics’ area and get my foot checked out and unfortunately couldn’t finish the race. It was a huge bummer, especially since I couldn’t hold second in the championship, but we’re just going to have to eat that, get some rest now and focus on the upcoming season.

Chase Sexton (Team Honda HRC) – DNS:
Overall, it was an up-and-down outdoor season. We had some real highs and some lows, but overall I feel like I have something to build on for 2022 and come out stronger. Congrats to Jett and the whole team on an awesome job this season.

Cooper Webb (Red Bull KTM) – Third:
Today was my best result, even though it was a third overall, I’m stoked! Unfortunately, I didn’t get the season started very well but I have to give it up to my team and the group of people around me for pushing me and believing in me. I knew what I could do on a dirt bike, so it’s good to be better and get closer to the front. It’s a lot to get to the front and we never gave up so I’m stoked to end the season on a positive note.

Dylan Ferrandis (Monster Energy Star Yamaha Racing) – First:
It was a crazy day at Hangtown! Coming into the weekend, I felt fresh and relaxed with no championship pressure. I knew it was the last time this year to do something, so I told myself I would give it everything that I had, and that’s what I did. I won the first moto and had a small issue at the start of Moto 2, but I managed to come back to third for first overall. I have the best team behind me. It was an awesome way to end the season!

Christian Craig (Monster Energy Star Yamaha Racing) – Fourth:
It was a solid day at Hangtown. I put in two solid finishes to end up with fourth overall and I was able to run up front and finally lead some laps in Moto 2. I’m happy to finish out the season strong and look to bring that momentum to 2022!

Eli Tomac (Monster Energy Kawasaki) – First:
In the first moto I was starting to get into a flow, I found some good lines, and I had a solid pace going until I crashed in the off-camber corner at the bottom of the hill. I tweaked my thumb in the crash, but regrouped to still finish fourth in that moto and reset for the second one. In Moto 2, I got off to a strong start and worked my way up to the lead which I was able to maintain until the end. I would have loved to come away with the overall win today, but with that small crash in the first moto, it just wasn’t in the cards. I’m happy to finish the season with a moto win. 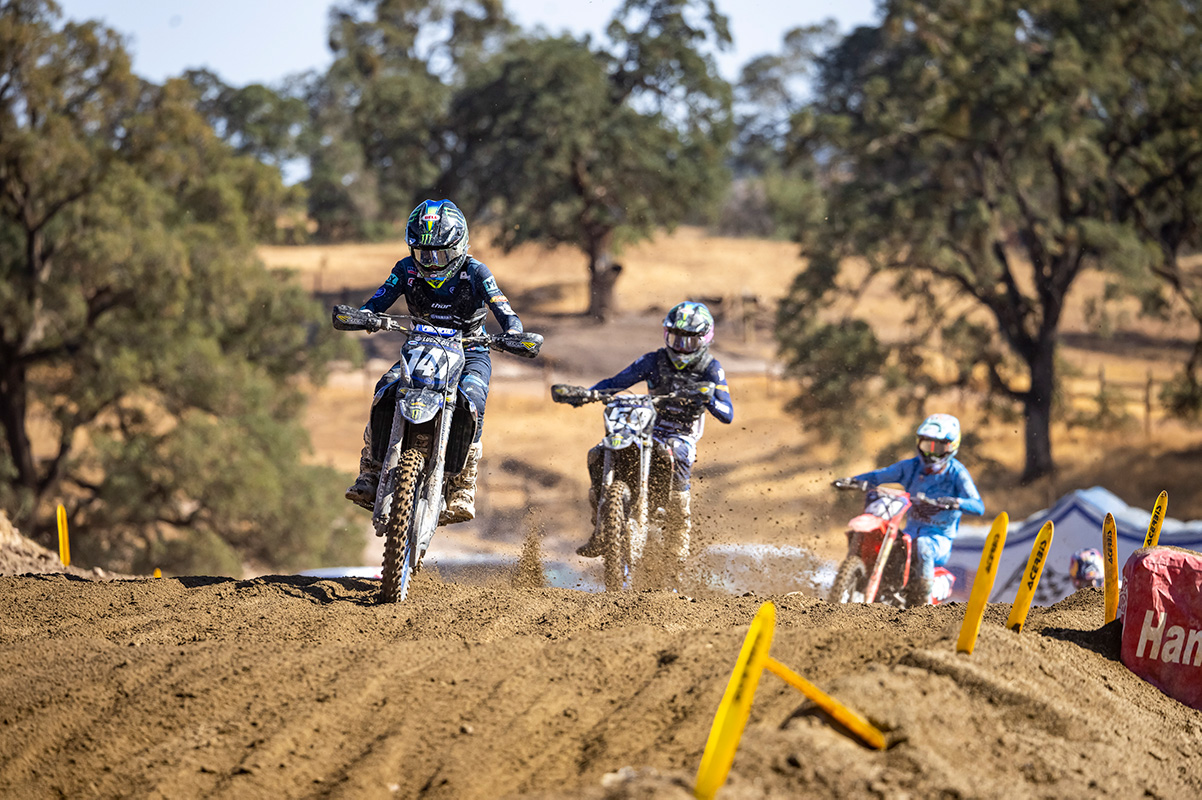 Hunter Lawrence (Team Honda HRC) – Sixth:
I’m happy to finish off the season – 8/10 would do it again [laughs]. I got third overall and obviously I would’ve loved more, but considering where we were at the start of the year, then going through Supercross, and making it to every race this year was a huge goal of ours. The past few years have been really tough with injury, so that was a big box that we checked this year. The team getting some race wins, a few overalls, some podiums and Jett’s championship was a good year and something great to build on for next year. I’m looking forward to some time off now to reflect with the team. A massive thank you to them, as they’ve been awesome; I couldn’t have asked for a better team and support all year long. I’m really excited get into next year.

Jett Lawrence (Team Honda HRC) – Fifth:
I didn’t ride good at all today. The practices were good, but I was ‘sleeping’ on the first-moto start and then was rushing stuff, but I got a bit of a blessing to come up to eighth. Going into the second one, the mental frame was just to go out there and do my job. I got up from the crash as quick as I could and tried to put on a charge and not override the track, because it was pretty rough. I kind of got a flow and just relaxed and made my way through up to third, which was a lot better than the first moto. It’s cool to wrap it up, but I don’t think it’s actually sunk in yet, realistically; I’m still trying to process it. I didn’t come over here for nothing; my one goal was to win a championship and since then I’ve really been working my butt off to get to where I am today. Thankfully it’s all paid off, and I can take a break and get ready for next season.

Max Vohland (Red Bull KTM) – Fourth:
I definitely learned a lot this season. I had a lot of ups and downs, which is pretty typical for a rookie, but to come out here and get fourth and be super close to the podium in front of this hometown crowd is amazing! I’m super honored and this is a big accomplishment for me.

RJ Hampshire (Rockstar Energy Husqvarna) – Third:
It was a good day to finish the season off. I still don’t feel that great but we managed through the day and saved what I could in that first moto. In the second moto, I got a decent start again and ran into the back of someone first lap and went pretty far back. I knew a podium was in the cards, so I dug deep at the end. It’s a good way to end the season off on the podium, so I’m stoked on that. I’m looking forward to a good off-season.

Joshua Varize (Rockstar Energy Husqvarna) – Eighth:
It was an amazing day at Hangtown. The highlight of today was getting the holeshot in Moto 2 and not having to worry about anything in front of you. I’m super stoked that I led a lap but then I just dropped the anchor and fell back to 11th. I saw a couple guys behind me and I found a bit more energy to push and stay in that spot. I’m stoked to end the season on a good note by tying my best overall finish and we’ll bring that into next year and push harder.

Michael Mosiman  (TLD Red Bull GasGas) – 10th:
It was a rough day if you look at the results sheet but I’m going to remember it as a lesson and not a loss. We have learned a lot in these last few rounds and we’ve got so much to build on. I’m excited, happy and proud of the team. I’m becoming a champion and they are becoming a championship team and it’s just cool to see the culture and myself change over these last few rounds. When I was out, I thought maybe I would race the last round and here I am three rounds in with a couple moto-podiums and the expectation has changed all-around. I’m excited to rest up and have a good off-season and I’m going to come out really sharp for next year.

Austin Forkner (Monster Energy Pro Circuit Kawasaki) – 12th:
“There are some things in your control and out of your control. It was a bummer to have to pull out early in Moto 1 but if there was any positive, I knew that I was going to be fresh for the second moto. I wanted to just get a good start and be proud of my ride so overall it was a good way to end the season.

Jo Shimoda (Monster Energy Pro Circuit Kawasaki) – Second:
I really wanted a win, but being up on the podium is big progress for me. I ended the last four races with good overall finishes and that is something I can take into next year. I know I am capable of more and will be working hard this off-season.

Justin Cooper (Monster Energy Star Yamaha Racing) – First:
We did all that we could today. I ended up having a fracture in my thumb from that Washougal crash, but it was feeling a lot better today and the team did a good job to get me feeling comfortable on a gnarly race track. It was a great season and we were on the podium every weekend, which was a big accomplishment for me. It was nice to get the 1-1 today, but it’s a little bittersweet to come up short in the end. I’m proud of myself and the team; we were able to rebound and we all worked our butts off.

Levi Kitchen (Monster Energy Star Yamaha Racing) – Ninth:
It’s been a great experience to run these past few races with the whole team. I’m very thankful for everything they’ve taught me and feel like I’m truly on the best equipment out there. I’m looking forward to next season.

Jarrett Frye (Monster Energy Star Yamaha Racing) – 11th:
Overall it was a pretty good day and we went 9-10 at the last round on a tough track. I gave it everything I had, so I’m happy with that.