‘I told myself I would give it everything’ – Ferrandis

450MX champion looks ahead to Supercross. 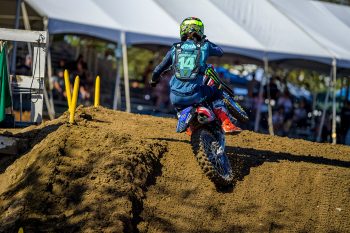 In the final Pro Motocross round of the season, Dylan Ferrandis vowed to give it his all, eventually coming through the pack from well outside the top 30 in the final moto to secure the overall victory.

In what he declared as one of the first races in quite some time that he was able to ride without pressure, the newly-crowned 450MX champion came into the final round looking to cap an incredible season with a win.

“It was a crazy day at Hangtown,” Ferrandis explained. “Coming into the weekend, I felt fresh and relaxed with no championship pressure.

“I knew it was the last time this year to do something, so I told myself I would give it everything that I had, and that’s what I did.”

In the final moto of the year, the Frenchman was caught up in drama off the start, which saw him start well outside of the top 30, leaving him to face the most adversity he’d seen all season.

“I actually didn’t crash [off the start],” he reflected. “I stood up and the bike of Coty Schock was stuck in my rear wheel, so I had to stop.

“I took it as a challenge, and I say ‘okay, let’s see what I can do.’ I was feeling fresh because in moto one I was not pushing too hard, to save some energy. So yeah, I was surprised at the result too, but yeah I gave really everything I had to finish.”

Eventually taking third in the moto and narrowly edging out Eli Tomac (Monster Energy Kawasaki) for the overall, Ferrandis now sets his sights on his second Monster Energy Supercross season in the 450SX class.

“Now you know, there is always new goal, when you’ve won something you always want more,” he concluded. “Now that we’ve won this motocross championship, our goal is on Supercross and we want to put all the work this winter and try [to win it].”