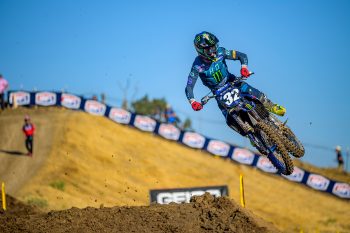 Justin Cooper confirmed that his 250MX title fight was marred by a fractured thumb that he sustained in his second moto crash at Washougal during round seven of the 2021 Pro Motocross season.

Cooper came into the final round of the season with a chance to win his first outdoor championship, despite injury and illness holding him back. With 23 points separating him and Jett Lawrence (Team Honda HRC), he focused his energy on getting the best result possible.

The Monster Energy Star Racing Yamaha rider did just that, going 1-1 for the first time this season, but coming up just short, later revealing that a thumb injury was the cause of his demise in the final four rounds of the championship.

“We did all that we could today,” Cooper explained. “I ended up having a fracture in my thumb from that Washougal crash, but it was feeling a lot better today and the team did a good job to get me feeling comfortable on a gnarly race track.

“It was a great season and we were on the podium every weekend, which was a big accomplishment for me. It was nice to get the 1-1 today, but it’s a little bittersweet to come up short in the end. I’m proud of myself and the team; we were able to rebound and we all worked our butts off.”

Despite coming up short in the championship battle, Cooper managed to finish on the overall podium in every round, an accomplishment he’s proud of as he reflected on his season on the Hangtown podium.

“On the podium every weekend overall, it’s a big accomplishment for me, and yeah I gave it all I had, this is what I had to do,” he said on the podium. “I think everyone has seen the slump I had the last few weekends and that Washougal crash I ended up fracturing my thumb.

“I was trying to keep that a little quiet and you know trying to protect myself in the championship. We did give it all we had, no excuses, Jett [Lawrence] put in a lot of hard work this year and I don’t think anyone really realizes how long and hard this championship is physically and mentally.

“Huge congrats to that team and Jett, they’ve had an awesome season, and yeah I’m proud of myself. We were able to rebound, maybe a little bit too late but we tried our butt off the whole season and that’s what counts.”

Following recovery, Cooper will begin prep to defend his 250SX championship as the start of the 2022 Monster Energy Supercross series looms in the distance.