Lawrence hangs on at Hangtown to clinch 250MX crown

Commanding 1-1 for final round overall not enough for Cooper. 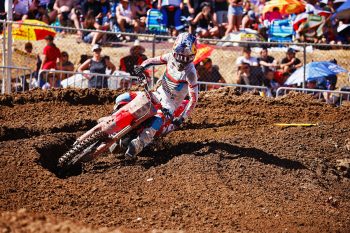 Teenager Jett Lawrence was able to hang on and capture the 2021 Lucas Oil Pro Motocross Championship in 250MX after the series went down to the wire in Hangtown’s second moto.

Lawrence, 18, wrapped up the title with 8-3 finishes this afternoon, holding on to clinch the crown following 12 rounds.

It was a challenging end to the season for the Team Honda HRC rider, crashing twice in the opening encounter and then falling once again in the final moto of the year.

Meanwhile, championship rival Justin Cooper (Monster Energy Star Racing Yamaha) maintained pressure all the way with a 1-1 for the round victory.

Jett Lawrence was buried outside of the top 10 and hit the ground hard a half lap in. Picking the bike up without a visor, Lawrence picked the bike up and made his way back toward the top 10, eventually getting collected by a rider who crashed in front of him.

With 25 minutes left, Lawrence was mired in 22nd, while Cooper sailed away at the front with Hampshire a few seconds behind. While running in third, Forkner encountered an issue with the bike and was forced to push the bike back to the paddock, leaving Schwartz in third.

Schwartz and Michael Mosiman (TLD Red Bull GasGas) came together, with Mosiman dropping deep in the order while Schwartz was able to pick his bike up and get back into ninth ahead of Lawrence in 10th. Lawrence worked his way around Schwartz, with seven seconds between him and Jarrett Frye (Monster Energy Star Racing Yamaha) ahead of him.

With a lap to go, Cooper had a few moments, but not enough let Hampshire close the gap. Lawrence caught Frye for eighth, making the pass as Cooper came across the line to take the win.

Come moto two, it was Varize with the holeshot ahead of Cooper with Ty Masterpool (AEO Powersports GasGas), Forkner, Shimoda, Vohland and Jett Lawrence just behind. Jett caught the back of Vohland and found himself back in 13th place with a lot of work to do to make it up.

After three laps, Cooper was out front ahead of Varize, Forkner, Shimoda, Schwartz, Vohland, Jett Lawrence, Masterpool and Hunter Lawrence in the top 10.

At the halfway point it was Cooper, Shimoda, Forkner, Vohland and Lawrence in the top five, as Jett caught the trio of riders in front of him. Lawrence followed Vohland past Forkner to get into fourth just after.

With two minutes and two laps to go, Cooper was out front with Shimoda second while Lawrence made his way around Vohland for third. The win went to Cooper from Shimoda, Lawerence, Vohland, Forkner, Hampshire, Schwartz, Hunter Lawrence and Frye in the top 10.

Overall, while Cooper won the round from Shimoda and Hampshire, it was Lawrence who clinched the championship by six points in the end, holding on for the title in fifth overall at the finals. Cooper took second, with Hunter Lawrence P3 in the points. 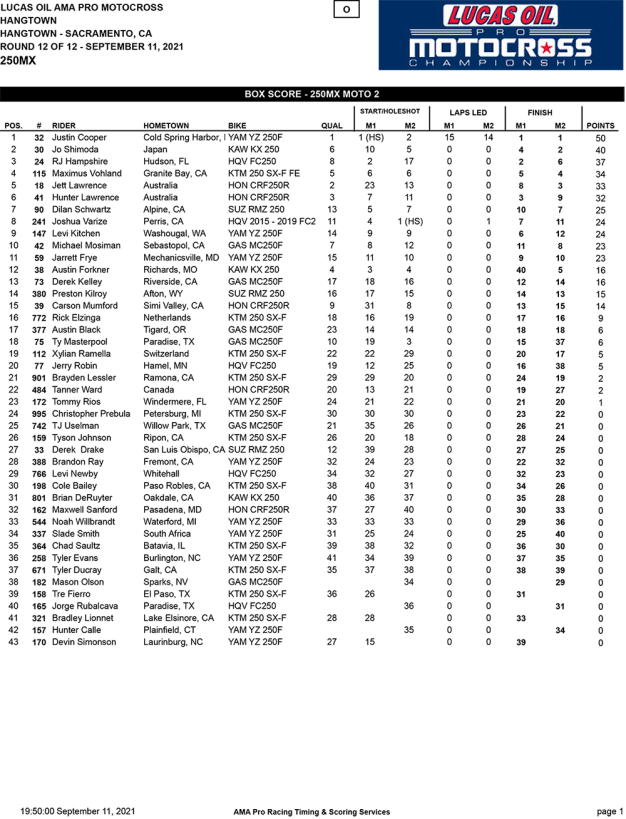