Ferrandis powers through to win Hangtown In a final display of dominance in the 2021 Lucas Oil Pro Motocross Championship, Dylan Ferrandis overcame the most adversity he’d seen all season to take home the final win of the season at Hangtown.

It was another hot day in Northern California, the newly-crowned champion started the day by qualifying fourth as Cooper Webb (Red Bull KTM) took the top qualifying spot to kick off the 12th round of the season.

In the opening moto, three riders were side by side through the holeshot line, with Ken Roczen (Team Honda HRC) grabbing the lead and immediately putting a gap between him and Webb, with Christian Craig (Monster Energy Star Racing Yamaha) just behind.

As things settled out it looked as though a battle between the fastest four riders was going to unfold, as Roczen, Ferrandis, Webb and Tomac all hit the front. Ferrandis eventually worked his way past Roczen at the halfway point and never looked back.

Tomac powered forward and began to reel in the leaders, eventually crashing, allowing Ferrandis, Roczen and Webb to take the podium, with Tomac taking fourth heading into the final moto.

In moto two, a chaotic start saw multiple riders hit the ground, leaving Roczen out early with a leg injury and Ferrandis in last. Craig hit the front ahead of Webb, Max Anstie (Twisted Tea HEP Suzuki) and Tomac.

10 minutes into the moto, Webb took over the lead from Craig, with Tomac taking second quickly after. Tomac then charged a downhill section to get past Webb and take over the lead, as Ferrandis had worked his way into fifth.

Tomac took the moto win as Ferrandis eventually charged through to take third, securing yet another overall victory, just edging out Tomac’s 4-1 scores.

The moto’s end signified the end of an era in the sport, as Tomac departs Monster Energy Kawasaki at the end of the day for the final time after a highly successful tenure with the manufacturer.

Webb managed third overall via 3-2 moto scores, in what he claimed was his best day of the season. Webb now heads into the offseason to prepare to defend his 450SX title aboard a new KTM 450.

Fourth on the day was Craig who notched his best result of the season with 5-4 scores in just his second race back from injury, while Brandon Hartranft (Twisted Tea HEP Suzuki) rounded out the top five with 6-7 finishes.

Max Anstie continued his run of form in his last race for the Twisted Tea HEP Suzuki team, taking home sixth overall by going 9-5 in the motos.

Seventh was a sensational ride from true privateer Ryan Surratt (Kawasaki), as the Southern California native managed 8-8 finishes to finish just ahead of Justin Bogle who went 10-7 on the day aboard his Rocky Mountain ATV/MC KTM.

Roczen had a day to forget in ninth after going 2-DNF, luckily the Team Honda HRC rider escaped any broken bones in his foot following getting his wheel caught in Coty Schock’s rear wheel off the start of moto two.

Roczen was followed by another great privateer ride, this one by Robbie Wageman who took home 12-9 finishes for a career best finish of 10th place.

Ferrandis’ win now puts him as the 16th rider ever to find his way to an overall podium in every round of the championship in his incredible rookie season. The offseason is now in full effect as the riders take a break before Supercross testing begins later this fall. 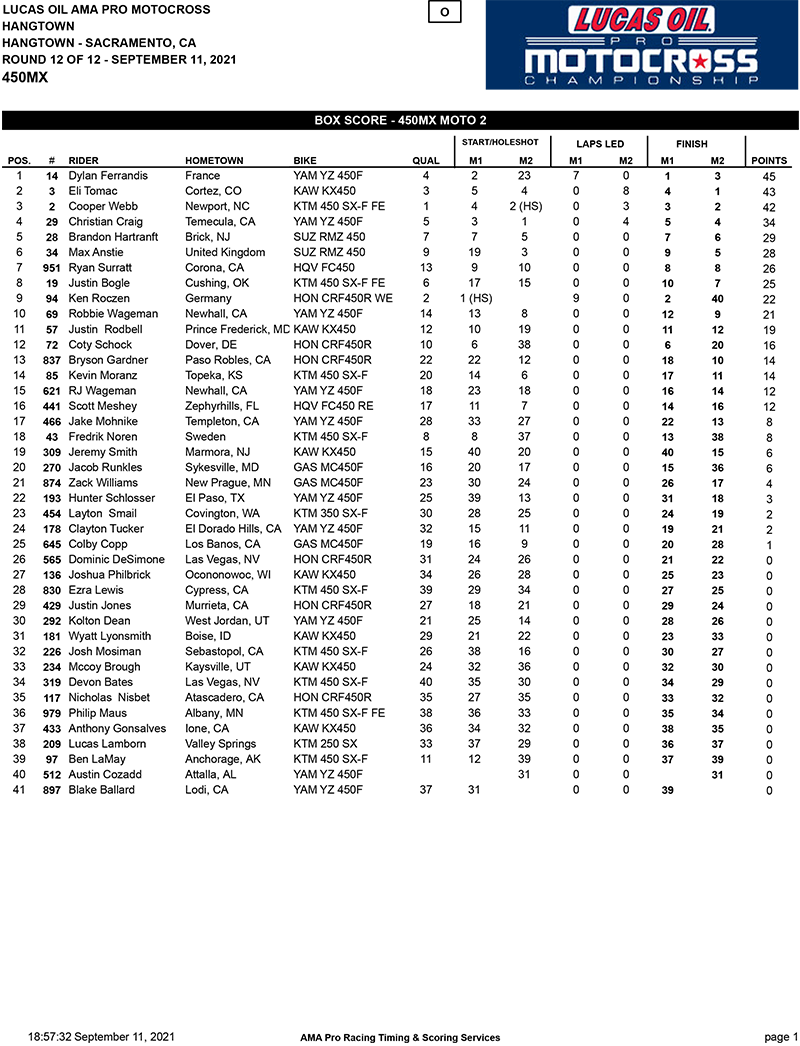