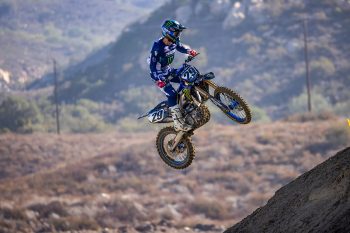 Monster Energy Star Racing Yamaha rider Christian Craig had a solid day in his return to racing on an all-new, reversed layout track at Fox Raceway.

After missing round 10 of the Lucas Oil Pro Motocross season at Ironman to recover from a heavy crash at Budds Creek, Craig returned to action for his home race at Fox Raceway.

The Temecula, California native has plenty of experience when it comes to cutting laps at the venue, and following his third top-five finish of the season, shared his thoughts on the all-new layout.

“Track backward was trippy at first,” Craig explained. It took me probably three or four laps to get the timing down of these jumps. You could tell the track went the other way for a long time, so you know, a lot of the landings were kind of lips still and steep.

“But I thought that was cool that they did that. The past three years Pala has been pretty much the same. So to flip it around and give us something different that was cool.”

While the layout was great, the triple-digit temperatures and incredibly rough racing surface brought a whole new set of challenges for everyone through the day, in what was one of, if not the most grueling race day of the season.

“Yeah, it was just brutal out there from practice one to the last moto, just how hot and rough it got,” he continued. “That second moto, I never really have shoulder or arm pump, but my shoulders were shot just from hanging on in all that chop. So I think that says just how beat up everyone was and that track was challenging.”

All in all, Craig would walk away with 5-4 moto scores, a welcomed result following a rough go in the previous few rounds of racing.

“Good day for me though, especially because the past few weeks have been tough for me,” he concluded. “Crashes, just okay finishes, but I haven’t had a solid day since Millville I would say, so to put together to motos like that, I’m happy.

“But I kind of was in my own little pace today. I was a little bit faster than the guys right behind me and then a tick off of the guys in front of me. So I was pretty much riding around by myself in fourth or fifth and just doing what I could. But yeah, all in all, it was a good day.”

Craig and the rest of the series contenders will now get one more opportunity to grab a podium as the series comes to a close this Saturday at Hangtown.