Late charge led to Roczen being sick in moto one

German now holds nine-point advantage in second as pressure builds ahead of finale. 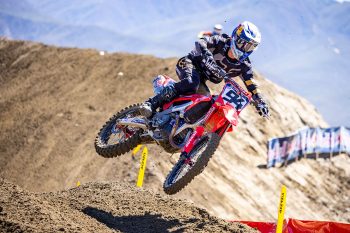 Feeling fatigued entering the opening moto at Fox Raceway, Ken Roczen revealed a late charge in an attempt to catch Eli Tomac resulted in sickness during the race.

The Team Honda HRC rider admittedly was feeling low on energy over the last couple of rounds which ultimately eclipsed as he vomited in the later stages of moto one.

Roczen persevered to finish third in what were the hottest temperatures of the season, however, left depleted in the second moto crossed the line in sixth resulting in fourth overall for the round.

“This weekend at Fox Raceway was tough,” Roczen explained. “I haven’t really been feeling like myself with my energy level the last couple of weekends, which have been the hottest rounds of the year. Those two things together don’t mix well.

“After a tough first moto, I really just tried to maintain and not override anything, because I knew I was super fatigued from the beginning.

“I ended up throwing up trying to make a late-race charge past [Eli] Tomac, which definitely depleted me even more. I have a history of fainting when I throw up, so it was a little scary for a second, but we picked it back up in the last lap to secure third in that moto.

“In the second moto, I had absolutely nothing left, so we finished sixth. Not an ideal weekend, but I’m just glad we made it through the day.”

Roczens results were not enough to stop Dylan Ferrandis (Star Racing Yamaha) from clinching the 450MX title, as the German now holds a slender nine point advantage in second over Eli Tomac who has won the last two rounds.

The Lucas Oil Pro Motocross Championship resumes this Sunday at Hangtown, which marks the final round of the 2021 series.