Ferrandis and Lawrence recall 11th round at Pala.

The penultimate round of the 2021 Lucas Oil Pro Motocross Championship from Fox Raceway is in the books and Dylan Ferrandis emerged as the 450MX champion while Jett Lawrence gained more control of the 250MX class with one round to go. The newly-crowned champion and the current red-plate holder in the 250 class were available after the race for this Debrief interview. 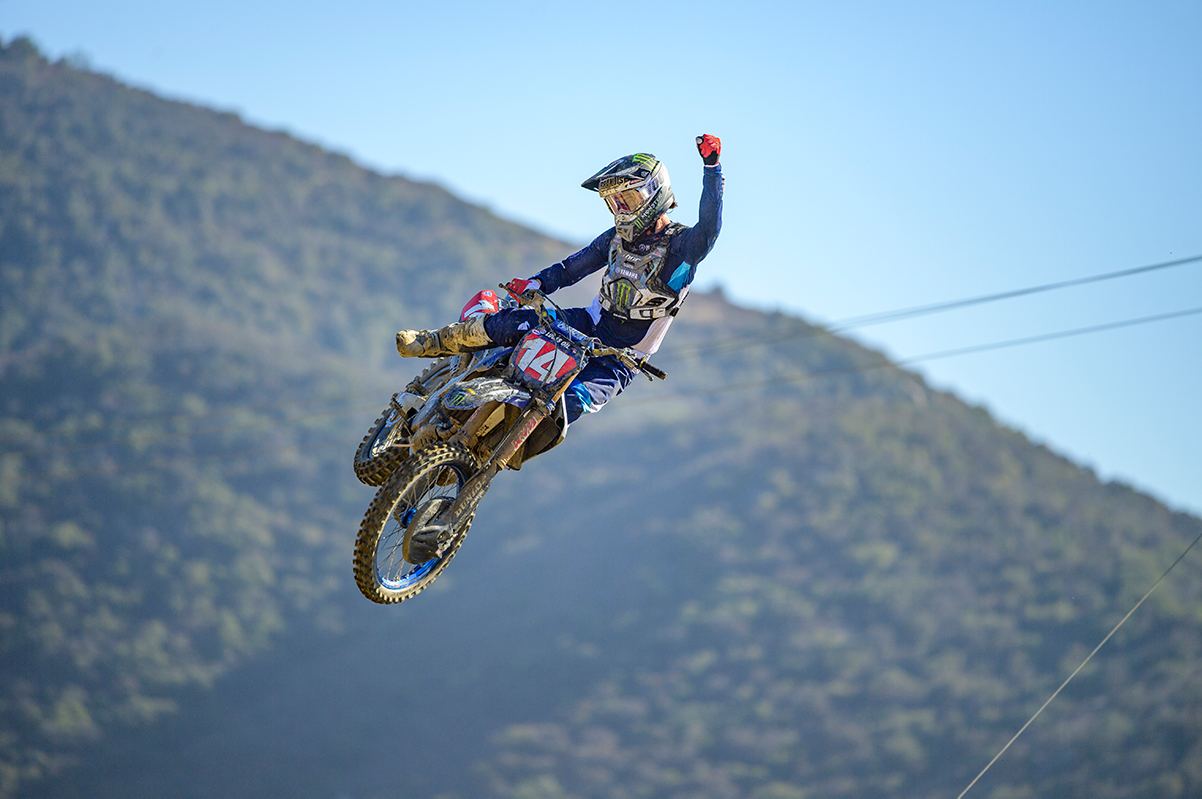 You looked comfortable all season long and you just seemed to get better. We had the toughest weather conditions today and you didn’t lose a step. How’s the season been for you and talk about wrapping the title up today.

For sure, was such an awesome season, and yeah I never really tried to think about this championship because for me it was like something I never believed I could do. I always train and try to be the best but yeah first season in 450, new team I never really expected to win. But for sure it was a surprise all season with the result. But yeah today we had this goal of winning the championship but you never know what can happen, so yeah all season was a big surprise so to finish the season like this, one round before the end is so unreal. Honestly the best feeling ever, but yeah I was kind of – it’s hard to put emotion on it because I put so much work into it that I felt it was a normal week, the same amount of work I put in before to get to this point I just felt almost like it was normal, but it wasn’t really. Jsut felt weird on the podium, but I think tomorrow morning when I wake up I will finally realize what happened and it’s just great, great for me. For all the people from Yamaha and all the people involved in the program, yeah it was really awesome. The track was really good today at Pala, I enjoyed the track condition but I think for the result it was really really difficult today for me personally. It was hard like the last two rounds have been, with the end of the season coming, it’s just hard for the body for everybody. We see everybody being really tired the last few rounds. After Ironman I was really tired and even after the first moto [today] I was really empty and I had to dig deep in moto two to finish out front and yeah, glad I did it.

Looking back to the GP days, there were signs you had speed and talent, but you maybe had too many crashes or bad motos that you dealt with back then. You’ve completely leveled out now to become a 450MX champion, I wanted to know what you believe are kind of the key catalyst to why those things leveled out and why you’re able to limit the damage now.

What happened when I was in the GP’s was that I had to face one of the greatest riders we’ve ever had, Jeffery Herlings. So I had to fight against him every weekend. So I tried to beat him every time and he was just too strong for me and most of the time when I had to match his speed and fitness I would finish on the ground and hurt myself. That’s why I think my career in MXGP didn’t go too well, because he was just better than me and I tried to match him and tried to beat him to much, so I finish too many times on the ground. That’s what also makes me better today, is that I learned so much from that and from him and I feel like even today, when I race against the guys like Eli [Tomac] when he’s on his best day, yeah, he might beat Jeffery, but he’s such an animal and like he was really the best rider I ever had to fight against. So yeah I think that’s why I had so many issue in GP’s, but yeah, moving to the US was because I wanted to ride Supercross so much and yeah, I don’t know, I just always put my head down and try to be the best I can and put some work in. So it took some time for my career to really get good, it took some time to really learn to live in the US and I have some championships in supercross and yeah I just get better every year. I think this season I was really at my peak, I’d never felt that strong before and I was at the peak of my career so yeah I hope I can sustain this level for a couple more years. When you when a championship it’s the best thing ever, so whatever happens in the future you still own this championship and that’s the best feeling.

Can you explain to us the feeling when you clinched the championship and what was the stand-out moment for you this season?

The feeling was weird a little bit today because I kind of ran out of emotion. Almost like I dug so deep this season, on so many days of racing I know Budds Creek, for example, I gave everything to win and I was just so tired today. So I just ran out of emotion and couldn’t really realize what I was doing. It was good for sure, but was just a weird feeling, because I just felt like I just did the job that all the people that pay me want me to do. So it was a little weird, maybe I need to think a bit about it to put some words to it. But anyway I think races like High Point were a big step for me when I was able to beat Ken in both motos and grab the overall, then more recently Budds Creek was one of the best races of my career. Both motos I was able to come from behind and pass all the best guys in the sport and like I said, I had to dig so deep to get the overall and that day physically I felt invincible on this day. I was maybe at the peak of my season maybe I don’t know, but that day I was on a cloud, I was flying. But the weekends after that I was really really tired, so I think sometimes when you really push too hard, after the there is a cost, and the cost is that you’ll be tired and take more time to recover. But yeah, sometimes you have to push more than everybody to get the win and that’s what I did, no regrets, today is just awesome. 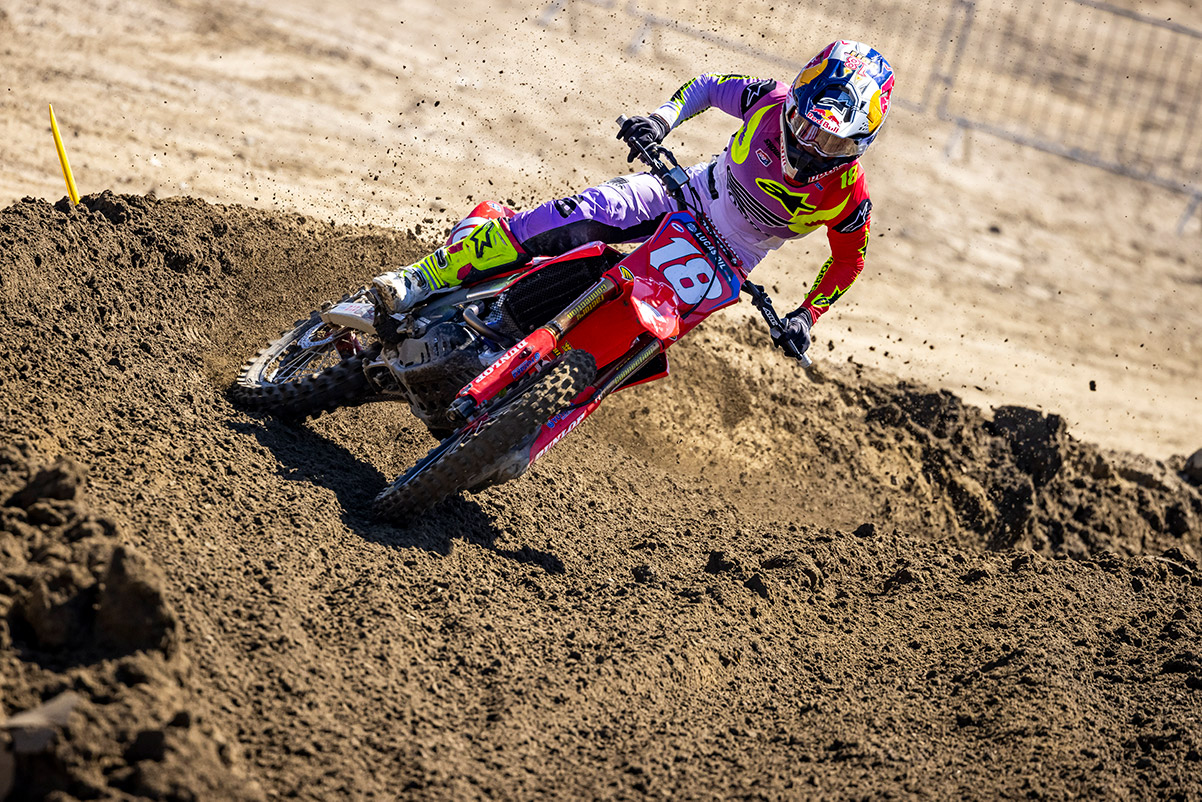 Jett you did it again, two straight 1-1 finishes and you’re three for three at Fox Raceway making you the winningest rider there, what’s the magic for today and how are you feeling going into the final round?

Yeah, I don’t know what the go is with this track, I can’t complain about it really. I’m setting myself up pretty well for this next weekend at Hangtown which is really good thankfully, getting another 1-1 is obviously awesome. But no, I’m looking forward to the next weekend and finally get it over with and have a break. I feel like it’s been a pretty long season. Today was pretty good with the track, it was different and I’m surprised I still won because in the practice I thought I sucked.

Second moto you ripped a holeshot, talk about the confidence you’ve been building the last couple of weeks and how that’s maybe helped in getting better starts.

Yeah, the funny thing is on our starts we changed our gate prep a little bit but realistically technique-wise with the start I actually haven’t changed much to be honest. It’s kind of been more of the not stressing so much about it, because halfway through the season when I started to get those bad starts I almost mentally screwed myself before I even did the start because I really wanted [them to be good] because I know [Justin] Cooper is really good at starts. My only chance of trying to battle with him is to actually get up there on the start. I think I was just overthinking them way too much trying to get them perfect and I think I was just digging myself a deeper hole. So coming to Unadilla, I only did a few starts, not many leading up to it, and just didn’t really worry so much about it, just kind of pictured what I needed to do in my head and just made sure I executed that. I felt like that’s really helped me in the past few days, plus the boys have been at it with the bike and improving it. So I think it’s a great mix with the team and my mental state with the starts and not overthinking it so much.

It looks like in the past two weeks it looks like there might be something HRC has found with the bike, is there leaps and bounds that have made it better for you or is it you’re just happy with the motorcycle?

It’s a little bit of a mixture of both. The team and I have been working pretty hard to try and always improve and they found a little step and we’ve found I feel like confidence-wise another step in speed. I think it’s just a mixture and thankfully, we’ve been seeing the results because we’ve been looking for quite a while to try and improve because obviously the star bikes they’re the top power of the 250 guys so we’re always trying to get closer to them. We found something that was really good to visually see it today really that we’ve closed the gap a little bit power-wise. It was really good to see because the boys have been putting in some hard hours at the factory searching for better things and I think it’s just been a mixture of what has been helping me lately. Then getting those 1-1’s and good starts I think it’s just helped confidence-wise. It’s been helping me get into a better position early to not have to fight out of 10th or something.

You’re not the type of guy to get nervous or caught up in the situation, but what’s this next week look like for you and next weekend as well?

Next week it’s going to be the same, me wanting to go play golf and Dazzy [Lawrence] and Johnny [O’mara] turning it down because I’ve got a race next weekend. Nothings going to change, I’m going to go into this weekend like I just sucked the weekend before and try and ride at 100%. Nothing’s gonna change because I still have to go there and do a job and I think that’s really it. Mentally I’m not going to change anything because I feel like I’ve been doing pretty good lately, so I’m not going to change my mental state where I am right now.