Belief evident in Mosiman’s return to the podium 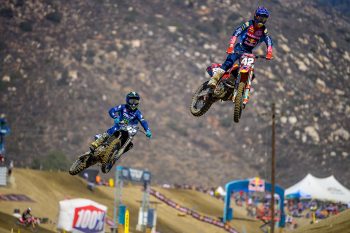 Michael Mosiman’s momentous return to Pro Motocross continued at Fox Raceway as he found his way to the overall podium for just the second time this season.

After just missing out on the podium in his return from injury at Ironman the week prior, Mosiman carried his momentum into the second to last round of the 2021 Lucas Oil Pro Motocross season at Fox Raceway.

The TLD Red Bull GasGas rider led through the opening stages of the first moto, eventually going 2-4 on the day for second overall to secure the third 250MX podium of his career, leaving the day feeling confident in his performance.

“Man, what a good day! It was a good day for the team and a good day for me with second overall in only my second race back after four weeks on the couch,” Mosiman explained. “I’m stoked on my riding and on my performance and I showed a lot of heart.

“I was absolutely drained after the first moto but I dug deep and was able to bring it home to fourth in the second moto. I’m looking forward to the home race next weekend in Northern California!”

Mosiman missed rounds seven, eight, and nine due to a crash in the break following Washougal, but has returned to fly the flag for a depleted TLD Red Bull GasGas team that lost both Pierce Brown and Justin Barcia to injury.

It’s not confirmed if Mosiman will be joined by Barcia for the final round at Hangtown this Saturday, but he’ll look to finish the season with another podium in his hometown race in Northern California.