Future of 450MX standout Schock now up in the air for next year. 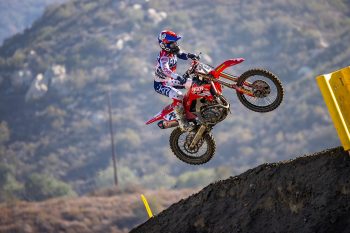 The FXR Chaparral Honda team will close its doors following this weekend’s Lucas Oil Pro Motocross finals despite a standout campaign from 450MX privateer Coty Schock in the 2021 season.

It was revealed at Fox Raceway’s penultimate round that the Michael Lindsay-owned organization would be ceasing operations following two seasons in the sport.

Schock, who has already indicated he was staying put at the team for next season, was informed at Pala and spoke out on the decision during the broadcast on Saturday. His future’s now up in the air, linked to multiple teams already and uncertain what category he will be in after initially planning to ride the 250 full-time.

“I’m honestly trying to find a job for next year,” Schock commented. “I was just told that this is no longer for next year, so I’m trying to decide if I want to do 250 or 450 for next year. We’ve got a lot to figure out, but I would like to be in the 250 class for next year and just prove myself.

“I’d love to ride with the 450 guys, that’s the prestigious [class] of the sport, but at the same time you have to prove yourself in the 250 class before you go there. I feel like, with everything I’ve learned for this year, bring that back to the 250 class and see what we can do. I’ve got a lot of figuring out to do… we’ll be out there.”

While Lindsay hasn’t formally announced the team closure, he did reference the challenged experienced as team owner in a post on the VitalMX forum this week. It has been reported by Steve Matthes that Lindsay will return to a media career at VitalMX in place of the retiring Steve Giberson.

“I tried my best to start a team to give riders a chance to further their career and now it all ends due to a combination of being personally screwed out of nearly $75,000 and sponsors who I’m still waiting to pay some bills,” Lindsay stated.

“I’m proud I was able to help Coty launch his career as he’s truly the nicest kid and an amazing hard worker. I believe I’ve got him a ride lined up for next year and his wrench Tony [Archer] has some amazing opportunities on the table. I’ll walk away from the team with debt that’ll take me years to pay off, but a life full of lessons.”

Schock has been a standout this summer in 450MX, currently 13th in the championship standings with a series of strong results including sixth overall at Ironman and seventh on the weekend at Pala 2. 250MX team rider Carson Mumford is also P13 in points.