The field is set for the penultimate round of the championship. 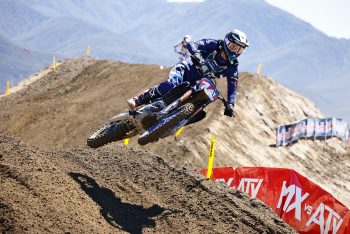 It was a Monster Energy Star Racing Yamaha sweep of the top spots in qualifying as Dylan Ferrandis topped 450MX and Justin Cooper led the 250MX class at Fox Raceway.

The field is set for the penultimate round of the 2021 Lucas Oil Pro Motocross Championship as the air temperature sores toward triple digits ahead of the opening motos.

In 450MX action, Ferrandis notched his best lap in the closing moments of the session with a 2m04.861s lap putting him ahead of title rival Ken Roczen (Team Honda HRC) who was the only rider in the 2m05s range.

Ferrandis is now 50 points ahead of Roczen in the championship and will clinch the title if he can manage to gain just one point by the end of moto two. If he does so, he’ll be the first Frenchman in 30 years to win the premier class title and first Yamaha since 2007.

Rounding out the top three was Cooper Webb (Red Bull KTM) with a 2m06.508s lap, following up his podium performance last round and continuing to prove that he’s coming into his own at the end of the season.

Joey Savatgy (Rocky Mountain ATV/MC KTM) ended the session in fifth as he continues to shine with top 5 qualifying performances, finishing just ahead of teammate Justin Bogle in sixth.

Returning to action this weekend is Christian Craig (Monster Energy Star Racing Yamaha) who managed seventh in qualifying, however he pulled off before the end of the session and headed for the pits.

Eighth was Max Anstie (Twisted Tea HEP Suzuki) who is returning to action after missing Ironman with Covid-19.

Anstie’s teammate Brandon Hartranft took his best qualifying finish of the season so far in ninth with the final spot in the top 10 going to Coty Schock aboard his FXR Chaparral Honda. 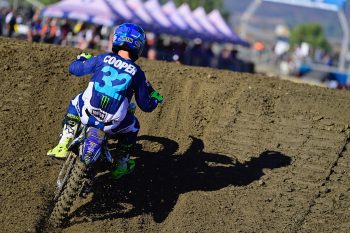 Justin Cooper kicked off the day by putting his Monster Energy Star Racing Yamaha at the top of the timesheets as the only rider in the 2m06s range with a 2m06.989s lap. Cooper looking to battle back after relinquishing the points lead last round.

Current championship points leader Jett Lawrence (Team Honda HRC) was second just over three tenths back with a 2m07.296s lap. Lawrence has traditionally done well at Fox Raceway and aims to increase his points gap in Pala today. as

Jo Shimoda (Monster Energy Pro Circuit Kawasaki) rounded out the top three as he continues solid form on the heels of a career-best finish at Ironman with second overall.

Fourth went to Michael Mosiman (TLD Red Bull GasGas) who barely missed the podium last weekend in his return to racing. Mosiman again carrying the flag as the only rider for the TLD squad this weekend. as

The impressive run of Ty Masterpool as the series wears on continued in qualifying this morning with the AEO Powersports GasGas rider ending the second session in fifth.

Sixth went to Austin Forkner (Monster Energy Pro Circuit Kawasaki) who is finally up and running inside the top 10 consistently as he works out the kinks from missing two full seasons of Pro Motocross.

250MX rookie Max Vohland (Red Bull KTM) was the first rider in the 2m08s range in seventh. Vohland ran up front in both motos despite mechanical failures, he’ll look to repeat that performance today at a track he’s spun a ton of laps on.

Eighth place was RJ Hampshire (Rockstar Energy Husqvarna) as he searches for his first overall win of the season. He’s shown he’s got the pace to run at the front but has been plagued by small mistakes throughout the season.

Hunter Lawrence (Team Honda HRC) ended the morning in ninth place. The elder Lawrence brother is still a touch off the pace as he was last weekend at Ironman.

Returning to action after a heart procedure to correct an issue he was having with his heart rate was Derek Drake (BarX Chaparral Suzuki), rounding out the top 10. Drake explained he was seeing his heart go as high as 237bpm before the procedure and is now back to full health.