Shoulder ‘too weak’ for Nichols to complete season

Focus turns to 2022 for the defending 250SX East champion. 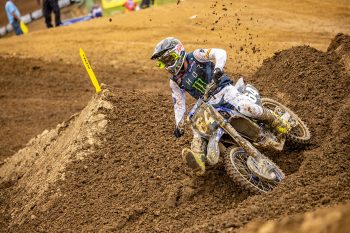 Nichols was injured in a crash during round seven of the Lucas Oil Pro Motocross series at Washougal and despite being able to ride during the week, has yet to regain full strength in his shoulder to be competitive.

“Wanted to give you guys an update, let you know what’s been going on,” Nichols explained. “Unfortunately my shoulder isn’t really progressing like I had hoped. I’ve been able to ride a little during the week, but it’s still just a little too weak to go out there and be competitive.

“So the team and I have decided to forego the last two rounds of the season. I’ll be at pala hanging out and hope to see everybody there.”

On the heels of his first championship, Nichols had an up and down season before hitting the sidelines just past the halfway point of the series. Notching a moto podium and best overall finish of fourth at High Point during round three.

He’ll now turn his focus to recover as he returns to the 250 class for next season, looking to defend his Supercross championship.