Assorted racer comments following the 10th round of the season.

In Quotebook, a selection of riders detail how their races played out at round 10 of the 2021 Lucas Oil Pro Motocross Championship at Ironman. 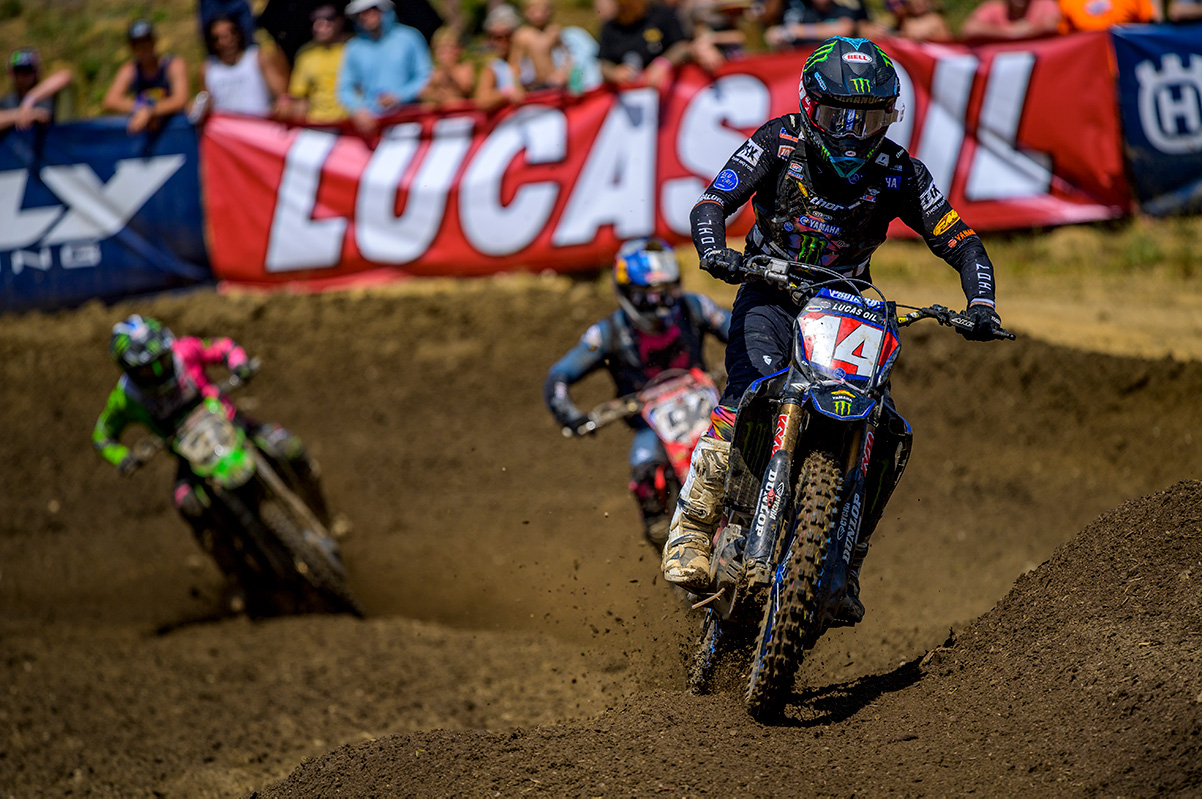 Ken Roczen (Team Honda HRC) – Third:
Indiana this weekend was just a so-so day for me and the crew; I went third and fifth for fourth overall, so nothing really to brag about. Still, even on those days you learn together with the team, throwing out ideas about the bike and what we want to try. It was a really hot one on top of that, so it made it for some really difficult race conditions. I didn’t quite have the level that I had the last couple rounds. We’re still healthy, so that’s good. We’re going wide-open into these last couple of rounds to hopefully finish out the season super strong and do the best we can for the overall championship.

Chase Sexton (Team Honda HRC) – Fifth:
Round 10 at Ironman, I honestly was just glad to make it through the day. I came into this weekend really sick. I got sick on Thursday and didn’t know if I was going to be able to race today, so to be able to come through and get two mediocre finishes is good. I’m looking forward to being healthy and ready to go at Pala.

Cooper Webb (Red Bull KTM) – Third:
Today was overall a step in the right direction and an awesome day. Getting our first podium of the year feels great and means that all the hard work is paying off – better late than never. I’m super happy with today and looking forward to finishing these last two strong.

Dylan Ferrandis (Monster Energy Star Yamaha Racing) – Second:
Today was a hard day, and I didn’t have the power to push deep. It was just gnarly physically, so to get that first moto win was awesome. Then in the second moto, I said it’s time to get the holeshot, and I did, but Eli (Tomac) was on it today, so congrats to him, he deserved this win. Second overall was a good result for today and good for the championship. The bike was awesome all day; we didn’t touch anything, which was great.

Aaron Plessinger (Monster Energy Star Yamaha Racing) – 13th:
It was another rough one for me. I felt good most of the day, and the bike was working awesome. The track wasn’t the best, and I was a little disappointed when it wasn’t too deep. This place usually ruts up really well with multiple lines to pass, but this time it was like a highway with sawdust on it. I finished Moto 1 in sixth, so that was better than last weekend, but I was still hurting going out for the second one, and my body just wasn’t ready for it, I guess. The plan is to recover this week and hopefully be back at Pala next weekend.

Eli Tomac (Monster Energy Kawasaki) – First:
In both motos today I gave myself good track position at the start and really jelled with the track well which led to a great overall result. In the second moto, I came around the first turn near the front and made some critical moves right away to get myself closer to the lead. Once I was up into second I knew it was go time for me and I was determined to get the job done. It’s awesome to celebrate this first win of the championship with the entire Monster Energy Kawasaki team!

Brandon Hartranft (Twisted Tea HEP Suzuki) – Ninth:
It was a good day,” said Hartranft. “I ended up P9 overall, so that was a solid finish. I was pretty much in ninth to 10th spot throughout qualifying and racing. I really like this track, so I was pretty stoked to come here. I was in about sixth place at the start of the first moto, but then dropped back to ninth. In Moto 1 I didn’t really feel that well. I rode much better in Moto 2. I fought hard for ninth and almost got to eighth on the last lap. I’ll take the positives from this weekend and with the team we’ll look forward to the last two rounds and hopefully we can be back in the top ten. 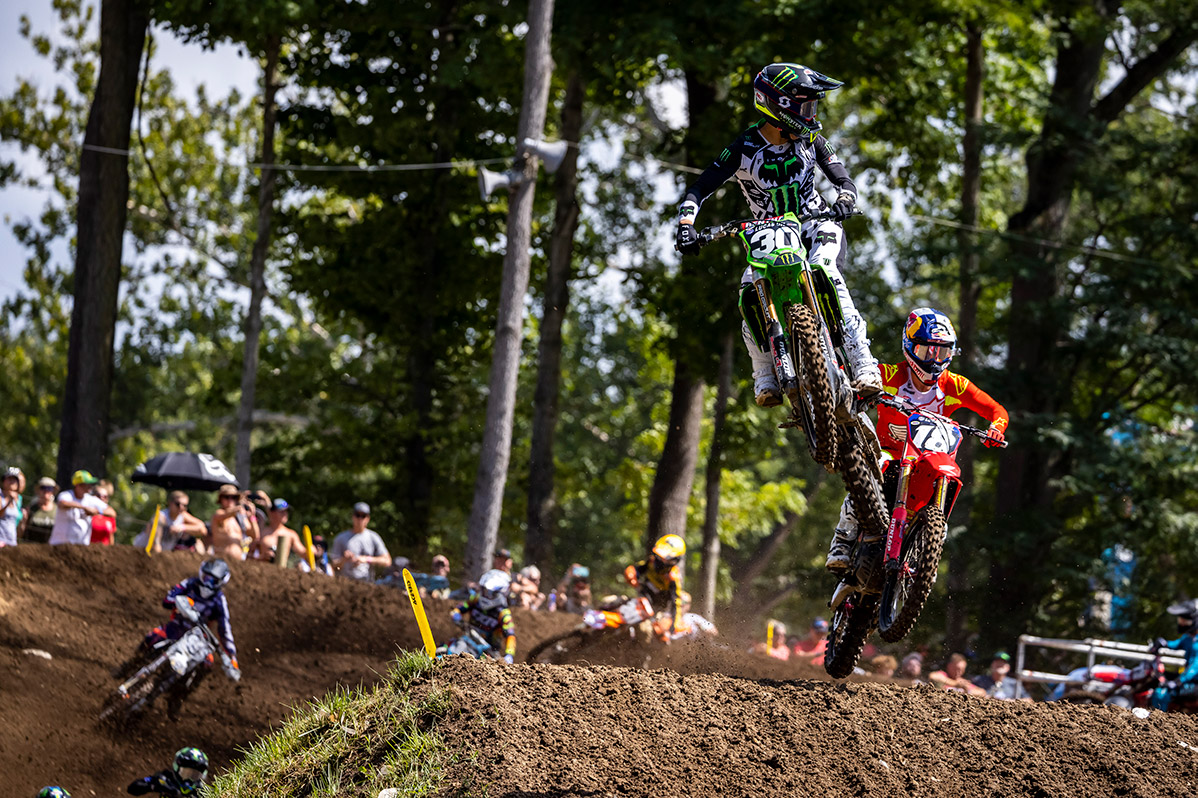 Hunter Lawrence (Team Honda HRC) – Ninth:
Today, I saw Jesus every lap — it was really tough. That’s about it — feeling really below par. I just struggled and did what I could to bring her home. With me just putting two motos out there, we ended up bumping me back up to third in the championship, so that’s a positive. The easier decision was obviously to stay home, but it was probably one of the toughest days of my career. I just pushed through it and ended up walking away super empty, so now I’m just focusing on resting up and trying to shake this [sickness] and bounce back next weekend.

Jett Lawrence (Team Honda HRC) – First:
So today was a very good day. I ended up going 1-1 in the first qualifying and then obviously 1-1 in the race, so yeah, pretty good day. I was just having a lot of fun and was having such a good flow on the track and having a great time. I felt like it really showed in those motos. I went out and gave it my best and was finally able to get my first 1-1 in a pro motocross race, so that was awesome. Hopefully we can carry on to do the same thing in these next two rounds. I’m going to go with the same mentality I came into today with and try and execute the same races as I did today.

Max Vohland (Red Bull KTM) – 15th:
I had a pretty solid day. In the first moto, I got off to a really good start and was up front and battled, ending up seventh. In the second moto, I was feeling really good and really strong running fifth for a majority of the moto and ended up having a small bike failure with two laps to go. It’s unfortunate but it is what it is, I rode good and felt good, so I’ll carry the momentum into Pala and definitely looking forward to Hangtown after that.

RJ Hampshire (Rockstar Energy Husqvarna) – Sixth:
It was quite the day and week but we showed up and gave it everything we had. I’m a little bit bummed on the first moto but happy to get second in the second moto. We keep digging and we show up every weekend, so you know what you’re going to get from me. I’m going to recover this week and be back to my form at Pala.

Jalek Swoll (Rockstar Energy Husqvarna) – DNS:
I was feeling really good and on the last lap, I had the bike sideways over one of the big triples and on the way down there was this weird freak incident and my feet came off the pegs and I just slid through the whole bike. I was trying to grab with my legs but it didn’t happen and I came down on the landing and had a big one. I tried to give the shoulder a go but it was just too weak from the impact on the first crash and kept popping out in the second qualifying. I tried to go out there for the first moto but it wasn’t worth the risk/reward for the day. We’re going to get it evaluated on Monday – I’m going to take my health seriously now and hopefully come back strong next year.

Michael Mosiman  (TLD Red Bull GasGas) – Fourth:
Man, I am so proud of our team, my riding and the day. I’ve only ridden three times in the last four weeks or so, and to come out like this with minimal preparation is just awesome. It was a challenging and hot day but I gave everything I had. All-in-all, it was a great weekend to build on and I’m looking forward to ending the last two on a good note.

Austin Forkner (Monster Energy Pro Circuit Kawasaki) – Fifth:
It was another good day overall, but I feel like if I had the starts I would have been able to show my speed a little more up front. For the season as a whole, this a great result and honestly happy to back up last weekend with another solid ride. But I want more. We’ll keep plugging away and hopefully have an even better ride next weekend.

Jo Shimoda (Monster Energy Pro Circuit Kawasaki) – Second:It feels amazing to see the work we did this week turn into a podium. I knew we could be up here and so happy to give this back to the team. They deserve it. I hope we can finish out the rest of the season strong.

Justin Cooper (Monster Energy Star Yamaha Racing) – Third:
It was a rough one for sure. I didn’t feel like myself all day and just struggled to keep the pace with the front guys. We’re going to keep fighting and keep digging. This thing isn’t over until the last moto.

It’s just a bummer for sure. I felt that I had the pace for the win, but that’s racing. We’re going to heal up and shift our focus to 2022.

Levi Kitchen (Monster Energy Star Yamaha Racing) – 16th:
Well, Ironman didn’t go as well as it could’ve, but at the end of the day, I’m happy with my speed. We’re going to keep working and get ready for Pala. I’m ready to rebound next weekend!

Jarrett Frye (Monster Energy Star Yamaha Racing) – 12th:
It was not the day I wanted. I went down on the start in Moto 1 and had to come from the back and was only able to make it to 15th. The second moto was much better. I got a decent start and finished 10th. We have two rounds left, so I’m going to give it all I’ve got.

Preston Kilroy (BarX Chaparral Ecstar Suzuki) – 11th:
Budds Creek was pretty good! I’m still learning and trying to figure this stuff out the best I can, but I felt as if my riding was a lot better than last weekend. In Moto 1 I didn’t get a very good start, so I got stuck in a big pack of riders. It was very difficult to pass on the track. I was able to get a much better start in the second moto, but a couple of mistakes cost me. Overall, I’m happy with the way things are going and I’m excited to keep learning and progressing each weekend.

Dilan Schwartz (BarX Chaparral Ecstar Suzuki) – 10th:
It was a tough day for me. In the first moto I was in fourth for about a quarter of a lap. Then I got tangled up with another rider and went down. I had a decent comeback to ninth place. In Moto 2 I crashed in the first turn and got ran over a few times; someone hit my bike and ripped the top of the brake line off, so I had no front brake. Then about halfway through the race the front brake line actually wrapped around my front hub because it was still attached at the bottom bracket. It locked the wheel on the face of a jump which caused me to crash. After that I was just in salvage mode and could only get up to 13th. I’m happy with the way I rode and with my fitness so I’m looking forward to a better day next weekend at Pala.