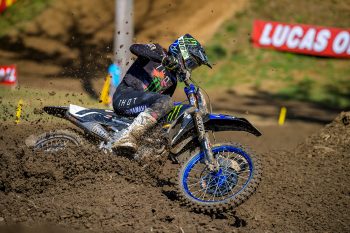 Still battered and bruised from his Unadilla crash, Aaron Plessinger progressed to find a top 10 finish in the opening moto at Ironman.

Plessinger suffered a well-documented, massive crash at Unadilla while battling for the lead in moto one, fortunately escaping major injury. Still hindered by the effects of the crash, he lined up at Budds Creek but was unable to finish the first moto.

Returning for another go in round 10 at Ironman last Saturday, Plessinger was able to finish the opening moto in sixth. While happy with the improvement, he was unable to finish the second moto, now planning to recover and try again at Fox Raceway this weekend.

“It was another rough one for me. I felt good most of the day, and the bike was working awesome. The track wasn’t the best, and I was a little disappointed when it wasn’t too deep. This place usually ruts up really well with multiple lines to pass, but this time it was like a highway with sawdust on it.

“I finished Moto 1 in sixth, so that was better than last weekend, but I was still hurting going out for the second one, and my body just wasn’t ready for it, I guess. The plan is to recover this week and hopefully be back at Pala next weekend.”

With that, he’s become a focal point in this year’s silly season speculation, as he’s rumored to be heading for Red Bull KTM for 2022. With a solid season under the Monster Energy Star Racing Yamaha tent, it remains to be seen if he’ll make the switch.