Ironman result lifts Mosiman into final rounds of the season 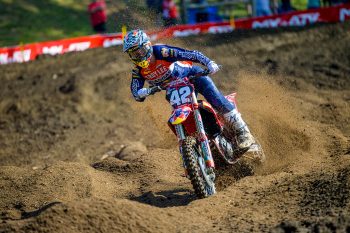 After spending over a month on the sidelines with injury, Michael Mosiman returned to action to take a moto podium at Ironman for the wounded TLD Red Bull GasGas team.

During the three-week break in the 2021 Lucas Oil Pro Motocross season, Mosiman was injured in a practice crash and was sidelined for what would be an undisclosed amount of time.

The 22-year-old return to action over the weekend, finding the front quickly and eventually notching a third-place finish in the opening moto. While the second moto didn’t go his way, his eventual fourth place overall was a welcomed boost in confidence as the series heads for the final two rounds.

“Man, I am so proud of our team, my riding and the day,” Mosiman explained. “I’ve only ridden three times in the last four weeks or so, and to come out like this with minimal preparation is just awesome.

“It was a challenging and hot day but I gave everything I had. All-in-all, it was a great weekend to build on and I’m looking forward to ending the last two on a good note.”

With Mosiman’s 250 teammate Pierce Brown out following a crash at Unadilla and Justin Barcia also on the injured list due to a practice crash during the break, his return was well-timed for the TLD Red Bull GasGas team.

The return to action was a welcomed sight for the team after all three riders were on the sidelines at Budds Creek, they’ll now shift their focus to the final two rounds of the season starting with Fox Raceway this Saturday.