Overall winners Tomac and Lawrence recall 10th round in Indiana.

The 10th round of the Lucas Oil Pro Motocross Championship is in rearview, with Eli Tomac notching his first overall win of the season in 450MX and Jett Lawrence taking control of the 250MX championship via a 1-1 victory. Both winners were made available to the media following the race for this Debrief interview. 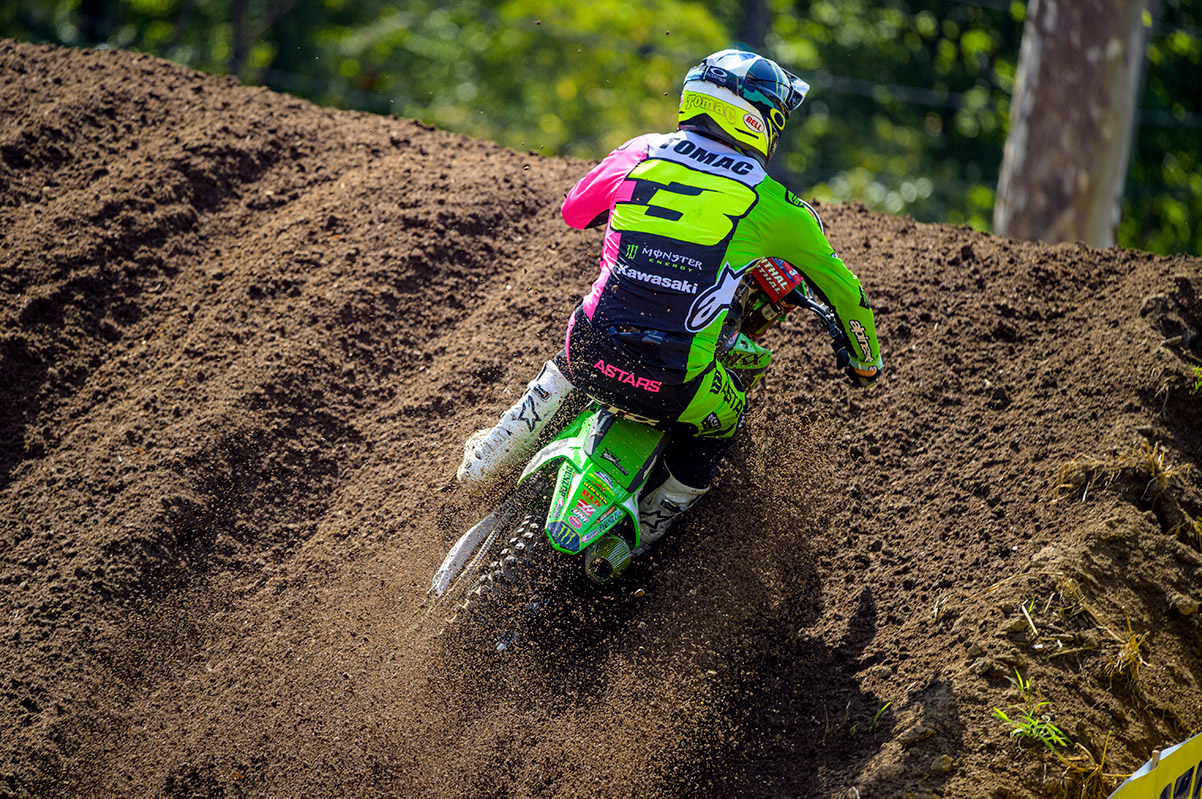 Is this a thrill to win or a sigh of relief because you’ve been so close all year?

It’s both. You know I’ve had really good second motos at some of these races and I’ve been really strong. I’ve had some of the fastest laps but was always off in moto one. Then I also you know just wasn’t getting starts. The fields too strong, Ken [Roczen] and Dylan [Ferrandis] are riding too good. So it’s been tough that way. Then today I finally put all those things together and made it happen, I felt really good on this track all day and it just kind of got along. In combination with good starts, I physically was strong too. It was one of the only really hot races we’ve had, last week was a little bit warm but nothing like today. So overall, nice to get one.

You’re just one win behind Bob Hannah in the all-time wins list, what would it mean for you to get one more before the end of the season to tie him on that?

It’d be sweet. It’d be sweet just to check off another win but yeah, at this point I was just so thankful to get today’s win. I had no idea about the overall win list thing, but yeah that’d be cool.

Eli obviously you knew where you stood after the first moto, you got to run up front and didn’t have to come through the pack. Were you confident that you could get the win today going into the second moto and did you make any changes between the races?

No changes between the races, same bike same set up. Yeah it just really is all about giving myself a shot for that second moto, is what I feel like it’s been at most of these races. So today, it was all about moto one you know, being in the hunt and being in the mix, just trying to get to that second place. Because like I said there’s a lot of fast guys, a lot of consistent guys and it’s just been a gnarly year that way. So yeah, we’ve been so consistent and that’s it, I was just focused on moto one.

As you become a vet and get a little older, does your training change at all, have you noticed a difference or how that relates on a weekend like this that is really hot and humid? Have you had to make a transition at all?

I feel like with age, the outdoors has gotten easier. I don’t know like when you get older, middle or late 20s, I feel like it’s gotten easier and even in the heat for me. So I used to struggle with the heat in the 250 class, if I saw 90 [degrees] and I knew it was going to be a humid race, I would be getting kind of spun out about it. But nowadays you’re kind of looking for that. I feel like endurance-wise, you actually kind of get better as you get older. 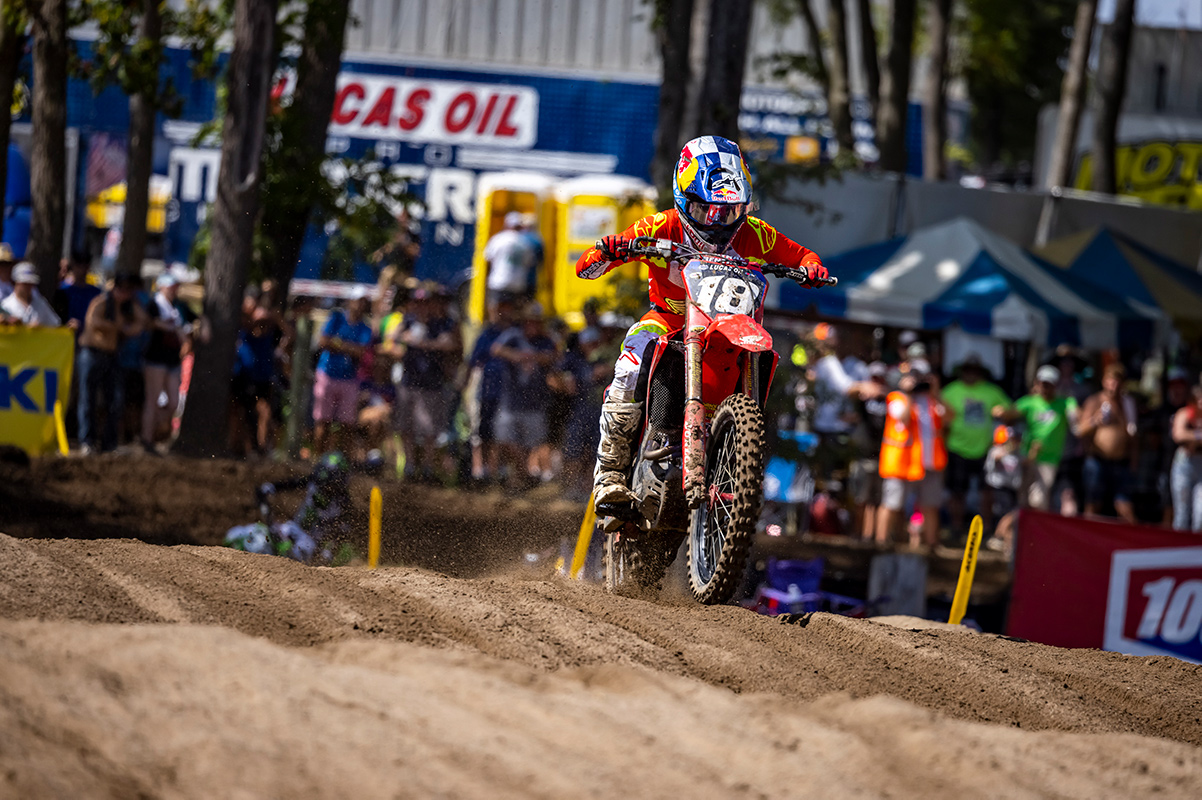 Today was probably the best performance we’ve seen from you in your professional career, how was it?

Today was just a really good day. Was having fun on the track and yeah, just having a good time on the track, had a good flow. I felt like the vibe was good at the truck you know and was feeling good all day. It was good to get two good starts out and that really helped me today to execute what I did. I think it was just an all-around great day, everything just kind of fell into place really, not many mistakes, so it was good.

There were some rumors that you could be potentially bringing out the 2022 CRF250R for the rest of the season, any truth to that, and what’s your take on it?

Today you gained a lot of points back in the championship, making things look a lot better on your end, how do you feel with this points gap going into the final two rounds?

It was obviously pretty nice to get the points lead back and get some space, but I mean it’s good but it doesn’t really matter if you have it now, the main thing is having it at the last round. I’m obviously pumped I got it back but I’m going to be making sure I can get [the gap] bigger and just go into these last two races like I did today. Go in and give it my all and see where I end up.

What will you do the next week ahead of Pala? Is there more riding for you or is it really just keeping yourself free and clear.

I don’t think I will change anything, you look at it and if something’s not broken why would you fix it. The training I’ve been doing is obviously enough, this series is pretty gnarly so I don’t want to put myself down too deep it’s already the end of the season. Otherwise, no, you don’t want to try to do too much, we’re at the end of the season, we’re already pretty fatigued mentally and physically so I don’t think we’ll be changing anything really.

The track seemed like one of the more racey tracks all year, what’d you think of it?

First moto was pretty good with lines, the second one kind of sucked to be honest, it was pretty flat and not as rough as some of the other tracks. It was a little disappointing because this track is pretty sick and gets pretty rough. It caused some great racing I felt like, in the first one with passing and that, so yeah.

You had the red-plate earlier this year, then there maybe was that little mid-season, I don’t want to call it a slump, but you had to kind of dig a little deeper and now you’re back. Is there anything in the last few weeks that’s clicked, has it been a matter of starts, what has been the change that’s helped you find momentum?

I think you’d have to be blind to not see what the problem has really been, it’s just been the starts. My riding’s not that bad it’s just that at a few races I’ve had those stupid little mistakes. It’s just been my starts that have been my problem. I think the best thing [I’ve done to fix it] was just not worrying about it. I was worrying about it trying to fix them and almost made it worse because I was trying to think more of it and trying to make sure I did good at it.