Swoll’s focus turns to next year after shoulder dislocation

Rockstar Energy Husqvarna down to just one rider for final two rounds. 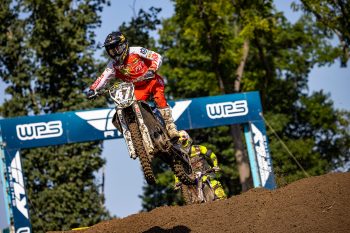 Rockstar Energy Husqvarna 250 rider Jalek Swoll has called time on his Pro Motocross season to get healthy for 2022, after dislocating his shoulder in qualifying at Ironman.

Swoll’s second season of Pro Motocross has come to an end after a qualifying crash left him with a dislocated shoulder.

Medical staff put his shoulder back in place and he attempted to ride the sight lap for the opening moto, but was unable to continue.

“I was feeling really good and on the last lap, I had the bike sideways over one of the big triples and on the way down there was this weird freak incident and my feet came off the pegs and I just slid through the whole bike.

“I was trying to grab with my legs but it didn’t happen and I came down on the landing and had a big one. I tried to give the shoulder a go but it was just too weak from the impact on the first crash and kept popping out in the second qualifying.

“I tried to go out there for the first moto but it wasn’t worth the risk/reward for the day. We’re going to get it evaluated on Monday – I’m going to take my health seriously now and hopefully come back strong next year.”

While his season ended early, Swoll managed seven top 10 finishes in nine races, including a career first overall win at round three. With him heading for the sidelines, it leaves RJ Hampshire as the lone rider for the Rockstar Energy Husqvarna squad in both the 450 and 250 classes.