Reigning 450SX champion opens up about switch from Bakers Factory. 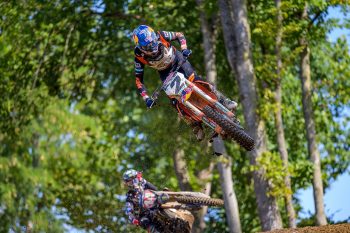 Following his first overall podium of the 2021 Pro Motocross season, Cooper Webb stated a frame change on his Red Bull KTM was the catalyst for his success.

When the series headed to Indiana for its annual stop at Ironman, Webb found the front in both motos eventually notching 4-3 moto scores for third overall, citing a change with the chassis of his KTM 450SX-F on the podium.

“I felt like myself today, we made some crazy changes [to the bike],” Webb explained, “We changed the frame and I thought Ian and Roger were going to possibly murder me. [Laughs] But I told them to trust me and I feel like today was a much better day.

“Step in the right direction, we’re on the podium and running with the leaders, led some laps, so I’m stoked. Wish we could have been here all season, but I’ll take it.”

“It wasn’t ideal to have to ask the team for it and hear the responses, but sometimes you’ve just got to trust your gut and know what you feel as a rider,” he continued. “So yeah it was good, obviously the team made it happen and we were able to get a really good result today.”

The bike settings aren’t the only changes Webb’s made this season, the two-time 450SX champion now calls the ’83 Compound’ his home for training, switching from Aldon Baker’s training facility following RedBud after three years working under the famed trainer.

“I think for me I just was on the edge of being completely burned out and not sure how much longer I really wanted to race to be honest,” he explained. “So it’s just been a good change for me, being able to ride with Jett and Hunter [Lawrence], they’re super fast and talented and just kind of bring some new life, guys that are excited to ride.

“I feel like we kind of push each other and I can kind of learn from them. And yeah, Joey [Savatgy] is really great during the week and Justin [Bogle] is fun to be around and stuff. So I think it was mainly just a change of pace. You know, I felt like I had done the same thing for three and a half years and I needed something else.

“Anyway, not sure where it’s all going to lead from here, but so far, since I’ve been there, I’ve been super happy with things and like I said, slowly improving and getting better with my riding and technique. Still working hard and getting the quality riding and training in, so it’s been good. It’s nice when you have results like this to have it pay off a little bit.”

“I’ve had great success, and I don’t have any issues or regrets or anything it was a great program. I just think for me, like I said, doing the same thing year after year, and it’s obviously rewarding in Supercross and stuff I’ve always done really well and it was great while I was there.

“I just think for me, I was at that point in my career where I needed a change, I’m only 25 years old and to be having thoughts of retirement is crazy. So yeah, felt like I needed a change and I’m still super competitive and have a great team behind me that are super hard workers and want to win just like I do.  We’re going to get a super good program headed forward and I’m looking forward to the new challenges ahead.”

Webb now sits fifth overall in the championship standings as he looks to find the podium in the final two races of the season, starting this weekend at Fox Raceway in Pala, California.