Direct updates from the 10th round of the season in Indiana.

Follow the 10th round of the 2021 Lucas Oil Pro Motocross Championship with direct updates from Ironman via Racefeed. 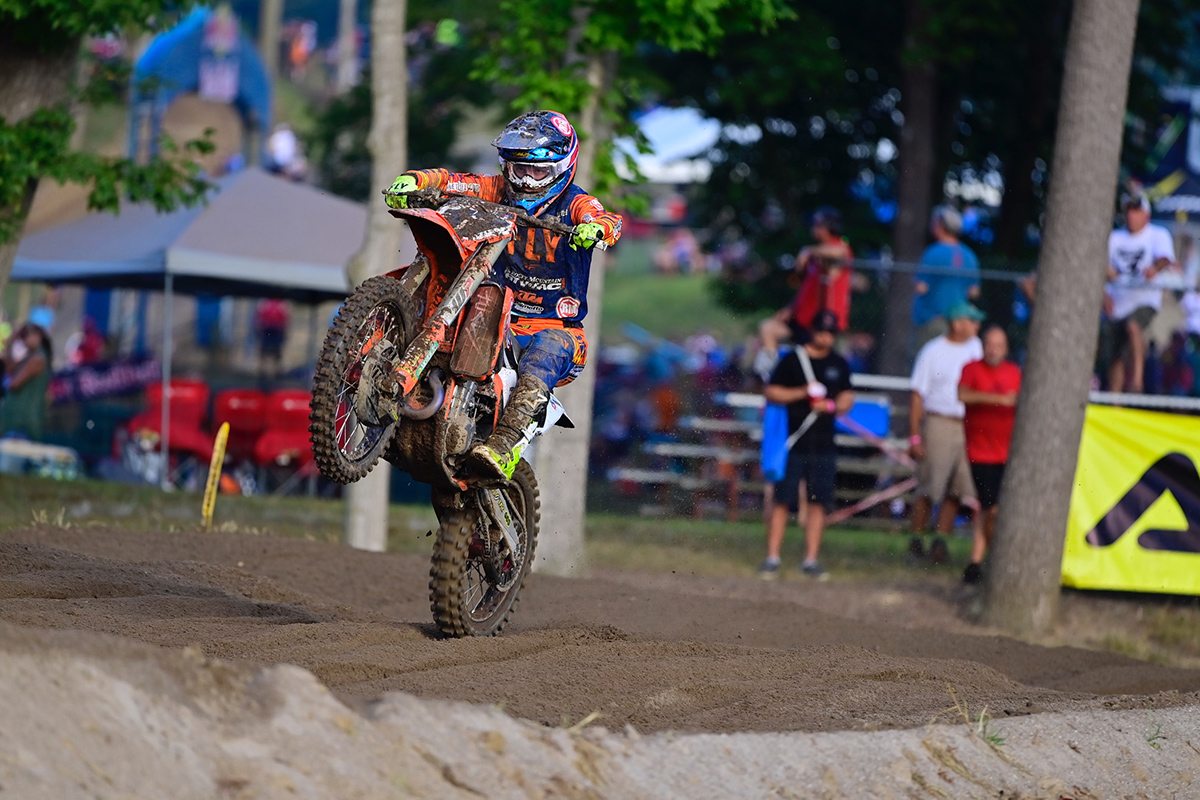 250 qualifying:
Jett Lawrence (Team Honda HRC) put himself atop the timesheets in 250MX qualifying with a 2m00.367s lap in the second session, with Jeremy Martin (Monster Energy Star Racing Yamaha) over a second back in second place. Martin’s teammate and current points leader Justin Cooper rounded out the top three, despite being nearly seven seconds slower than Lawrence in the opening session. Fourth was Jo Shimoda (Monster Energy Pro Circuit Kawasaki) as the first rider in the 2m02s range, with RJ Hampshire behind him taking the final spot in the top five. Sixth went to Austin Forkner (Monster Energy Pro Circuit Kawasaki), with Levi Kitchen (Monster Energy Star Racing Yamaha) in seventh in just his fourth ever qualifying. Eighth was Michael Mosiman (TLD Red Bull GasGas) in his return to action from injury with Dilan Schwartz (BarX Chaparral Suzuki) and Jalek Swoll (Rockstar Energy Husqvarna) rounding out the top 10. Hunter Lawrence (Team Honda HRC) finished the morning in 11th overall.

250 moto one:
Cooper took the opening holeshot ahead of Jett Lawrence, Max Vohland (Red Bull KTM), Martin, and Shimoda. Vohland put a pass on Lawrence for second quickly, with Jett making the pass back a half lap later. Lawrence set out after Cooper ahead, catching him in lap two, as the duo began to break away from the chasing pack. At the end of lap one, it was Cooper, Lawrence, Vohland, Martin, Shimoda, Ty Masterpool (GasGas), Mosiman, Brandon Scharer (ClubMX Yamaha), Preston Kilroy (BarX Chaparral Suzuki), and Jerry Robin (GasGas). Three laps in Martin made a move around Vohland for third, as Lawrence mounted a charge and found his way around Cooper for the lead. Lawrence put his head down, opening up a gap of over one second in a lap. Deeper in the field the battle began to heat up for fourth place as Shimoda and Mosiman began to pressure Vohland for the spot with Shimoda getting the spot. Martin made his way around Cooper for second, with Lawrence checked out at the front by over four seconds. Martin found serious rhythm and laid down the first sub-two minute lap of the day by a 250, as he began to reel Lawrence in. Behind them, Shimoda caught and passed Cooper for third, leaving the points leader in the clutches of a charging Mosiman in fifth. Lawrence and Martin were 13-seconds ahead of them, with Martin right on the rear wheel of Lawrence now. The duo going side-by-side of multiple sections, with Martin running high speed outside lines in attempt to get around Lawrence. Lawrence maintained the lead, withstanding the first push from Martin. Meanwhile, Cooper dropped to fifth as Mosiman found his way around. Martin hit the ground hard, his moto ending on the spot with an injured right arm. Lawrence now takes a 17-second lead over Shimoda and Mosiman who were now locked in a battle for second. Masterpool found his way into the top five, just five seconds down on Cooper in fourth. At the front with two laps to go, Lawrence was eight seconds ahead of Shimoda and Mosiman, with Cooper fourth. Lawrence held on for the win, with Shimoda, Mosiman, Cooper and Forkner rounding out the top five. Masterpool was sixth, as Vohland, Carson Mumford (FXR Chaparral Honda), Schwartz and Preston Kilroy (BarX Chaparral Suzuki) rounded out the top 10.

450 moto one:
Savatgy grabbed the holeshot ahead of Ferrandis, Tomac, Jace Kessler (Yamaha), and Sexton in the top five. Roczen charged from sixth to work his way into second, putting him just behind Ferrandis as the duo got past Savatgy. Roczen wasted no time getting around Ferrandis and the duo began to break away from the pack. Tomac responded quickly, passing Savatgy and catching the lead pack almost immediately. Ferrandis gained momentum ahead of the roller section and found his way around Roczen in the following corner. Roczen charged and pulled up alongside Ferrandis, with the points leader responding and regaining a bit of a gap as the clock clicked down to 22 minutes to go. Behind the top three of Ferrandis, Roczen, and Tomac, it was Webb, Savatgy, Sexton, Hartranft, Plessinger, Schock and Kessler in the top 10. Roczen closed n the next lap, the duo coming together now closing the top three within a few bike lengths. With 15 minutes to go, Tomac found his way around Roczen for second place, with Ferrandis now one second ahead of the chasing duo. Tomac surged and found the back of Ferrandis with seven minutes to go, closing the gap to just under one second. Deeper in the field, Sexton and Plessinger worked their way around Savatgy, dropping him to seventh. With two laps to go, Ferrandis stretched out a three-second lead over Tomac, with Roczen dropping to nine seconds back from the leader. In the end, Ferrandis grabbed the win ahead of Tomac and Roczen rounding out the top three. Fourth was Webb, with Sexton, Plessinger, Savatgy, Schock, Hartranft, and Bogle rounding out the top 10.

250 moto two:
Shimoda grabbed the holeshot from Lawrence, Masterpool, Cooper, and Hampshire. Cooper worked his way past Masterpool, closing in on Lawrence as the duo chased Shimoda through the second lap. Lawrence set up an outside move to gain momentum through the rollers, getting around Shimoda, the Japanese rider pulled back alongside but Lawrence ultimately secured the position. The duo was now 2.5 seconds ahead of Cooper in third. The top 10 with 23 minutes to go was Jett, Shimoda, Cooper, Hampshire, Masterpool, Kitchen, Vohland Mumford, Forkner, and Frye, with Hunter Lawrence circulating in 11th. Kitchen worked his way around Masterpool for fifth as Lawrence stretched out a near three-second lead over Shimoda at the front. Kitchen caught Hampshire, eventually pulling off the track and dropping down the order to ninth. With 12 minutes to go, Cooper came under fire from Hampshire, the latter making an easy pass and taking over third place. With five minutes to go, Lawrence maintained an eight-second lead over Shimoda with Hampshire, Cooper, and Vohland rounding out the top five. Hampshire made his way to the rear wheel of Shimoda, making the pass, with Shimoda battling back in the following corners. With two laps to go, Lawrence was eight seconds out front, as Shimoda continued to pressure Hampshire for second place over 15 seconds ahead of Cooper in fourth. In the end, it was Jett Lawrence taking the win ahead of Hampshire, Shimoda, Cooper, and Forkner rounding out the top five, with Mosiman, Masterpool, Mumford, Lawrence, and Frye taking the final spots in the top 10.

450 moto two:
Ferrandis grabbed the holeshot with Webb, Sexton, Schock, and Tomac rounding out the top five, with Roczen in sixth. Webb pressured Ferrandis in the opening lap, the duo breaking away from the pack, Webb eventually grabbing the lead from the points leader. Tomac pressured Ferrandis and made the move into second behind Webb in the second lap as Roczen made his way past Sexton shortly after, setting his sights on the lead trio. Nine minutes into the moto, Tomac pressured Webb and took the lead. Ferrandis worked his way around Webb shortly after, with Tomac now over four seconds ahead. Tomac continued to stretch out a lead, as Sexton found his way around Roczen, pushing him back to fifth. The top 10 settled in, seeing Tomac lead by eight seconds over Ferrandis, with Webb, Sexton, Roczen, Schock, Bogle, Savatgy, Hartranft, and Kyle Chisholm maintaining the top 10 spots. Webb continued to pressure Ferrandis for second in the closing laps, cutting the gap to nearly a second. At the front, it was all Tomac taking the win and the overall ahead of Ferrandis, Webb, Sexton, and Roczen in the top five. Sixth went to Schock ahead of Bogle, Savatgy, Hartranft, and Chisholm.