Lawrence kicked off the day in Indiana for round 10 of the 2021 Lucas Oil Pro Motocross Championship down three points on Justin Cooper (Monster Energy Star Racing Yamaha) in the title race.

In qualifying, it was clear Lawrence was on a mission, qualifying over a second faster than the competition and in the first session lapping nearly seven seconds faster than Cooper.

The lead duo began to battle, with Lawrence withstanding the charge from Martin, who would eventually crash hard, effectively ending his day and season, sustaining a broken wrist in the crash.

In the end, Lawrence grabbed the moto one win with Shimoda and Mosiman, Cooper and Austin Forkner (Monster Energy Pro Circuit Kawasaki) rounding out the top 5.

The top three settled in until around the halfway point, when Hampshire found his way around Cooper for third and set his sights on Shimoda in second.

With Lawrence over eight seconds out front, Hampshire caught Shimoda in the closing laps and set up a battle for second, with Hampshire ultimately coming away with the position.

Lawrence eventually grabbed the win, securing 1-1 moto scores for the overall and reclaiming the red plate in the process. A 12 point swing on the day gives him a nine-point advantage heading into the final four motos of the season.

Second went to Japanese rider Shimoda with 2-3 moto scores giving him his career-best result and grabbing one of few podium finishes for the Monster Energy Pro Circuit Kawasaki team this season.

Cooper’s consistent 4-4 finishes put him third overall, securing yet another overall podium for his season. He remained confident following the race, commenting that there was plenty of racing left to close the gap to Lawrence for the championship.

Mosiman had an impressive day in his return to action following an injury that happened in the break ahead of Unadilla, taking fourth overall via 3-6 finishes on the day. Forkner continued his great run of form from last round, notching 5-5 finishes for fifth.

After finishing 13th in moto one, Hampshire’s second place in the final moto lifted him to sixth overall. The Rockstar Energy Husqvarna rider admitting his struggles in the high temperatures and humidity the Indiana weather provided today.

AEO GasGas rider Ty Masterpool continued his impressive season with 6-7 moto scores leaving him with seventh overall on the day. The rider out of Texas has been dealing with rib issues that seem to be subsiding as he continues to progress late in the season.

Eighth went to Carson Mumford aboard his FXR Chaparral Honda who notched consistent 8-8 moto finishes, beating Hunter Lawrence’s (Team Honda HRC) 12-9 scores that saw him finish ninth on the day. Dilan Schwartz again put his BarX Chaparral Suzuki inside the top 10 with 9-13 finishes seeing him round out the top 10.

The series now heads back to the west coast for the final two rounds, starting Saturday with round 11 at Fox Raceway, a venue that Jett Lawrence has found success in the past two visits to the track. 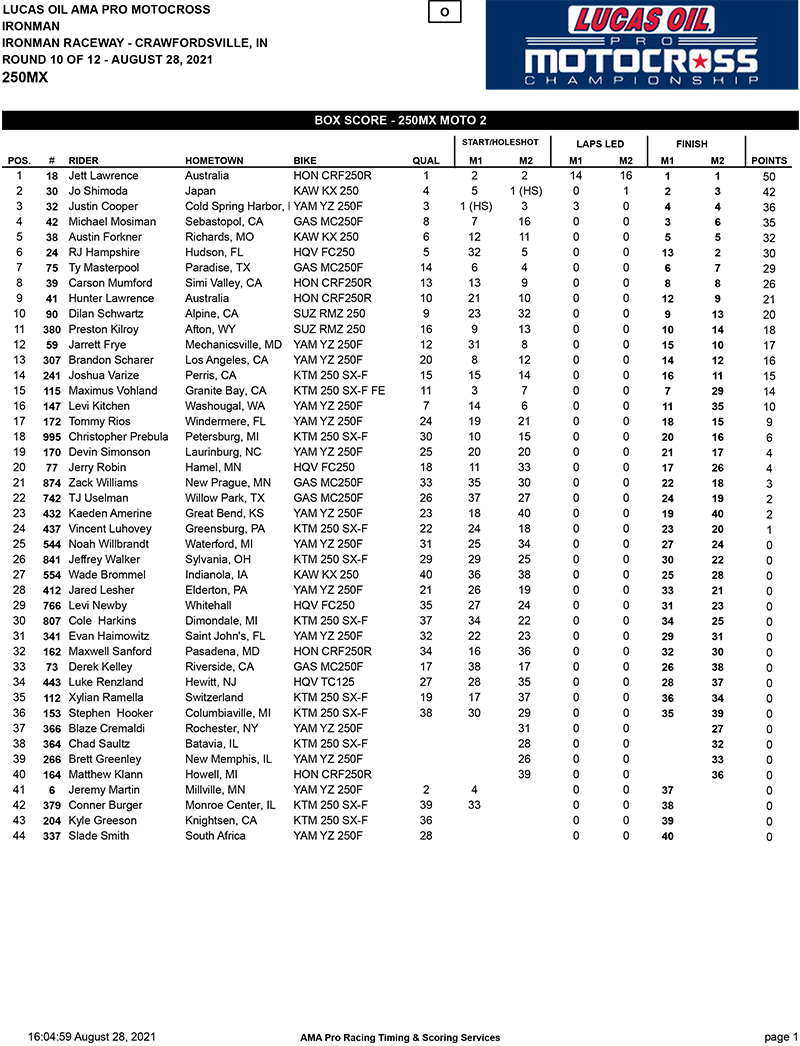