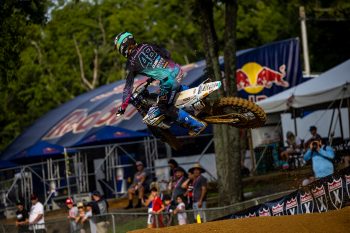 Garrett Marchbanks has announced he’s been battling Addison’s Disease, forcing him out of Ironman this weekend with hopes to return for the final two Pro Motocross races of the season.

The ClubMX Yamaha rider has had some solid races this season, consistently running inside the top 10 in his first full season with the team, with a best finish of fifth overall at High Point.

Marchbanks had issues at Budds Creek last weekend and has announced he’s been diagnosed with Addison’s Disease, which affects the body’s adrenal glands and the ability to produce cortisol, effectivly putting him on the sidelines for Ironman.

“Not exactly the post I want to make right now but I’ve been having some struggles on the bike and finishing races, Marchbanks explained. “Like any top athlete, you know when something’s not right with your body but you keep fighting through it hoping it will go away.

“With the support of my team and a group of doctors, it turns out I have Addison’s Disease. I won’t be at Ironman this weekend but we have a recovery plan for the short and long term to get me back to 100%.”

While out for the Indiana round, Marchbanks is hopeful that his season is not over, as he still has hopes to return for the final two rounds of the Lucas Oil Pro Motocross Championship at Fox Raceway and Hangtown.

“I’ll do some testing soon and know if I’m ready for the final two rounds in Cali to end the season on a high note,” he continued. “Thanks for your understanding as I work through this issue.”