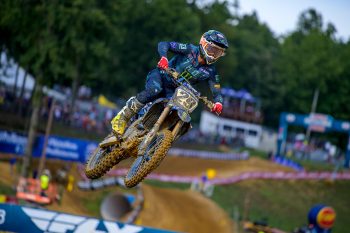 Craig crashed during the second lap at Budds Creek, but was able to complete the second moto in eighth. However, complications from the fall mean he will not ride at round 10.

“It was a pretty wild day at Budds Creek,” Craig reflected. “Qualifying went well and I was confident going into the motos. Unfortunately I got a really bad start in moto one and a few laps later had a big crash. I was pretty shaken up and unable to finish the moto, but I felt good enough to go out for moto two and finish eighth.”

Craig currently sits eighth in the 450MX standings, his best result of the 2021 Lucas Oil Pro Motocross Championship coming at Spring Creek with a fourth in the opening moto. He intends on returning for Fox Raceway next week.

Star Yamaha teammate Aaron Plessinger will again attempt to compete in the 450MX class at Ironman after sustaining internal bruising at Unadilla, while Colt Nichols has been back on the bike this week – his return to be confirmed – and Nate Thrasher is still recovering from shoulder surgery.