250MX leader Cooper ‘did what we needed’ in salvage mode 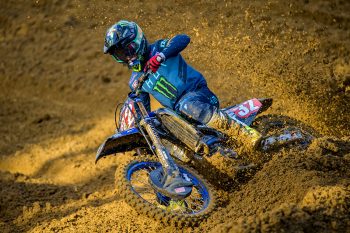 In his bid for the 2021 Lucas Oil Pro Motocross Championship, Cooper has been consistent. Yet to miss an overall podium, that trend continued at round nine.

After winning the first moto, Cooper could only manage fourth in moto two, later admitting he was under the weather through the week, which cost him after leaving it all on the track in the opening race.

Despite the result, the Monster Energy Star Racing Yamaha rider only lost one point and was satisfied to get away from a bad day with a decent result.

“It was a hot one today, which made for a tough day being sick coming into this one, but we did what we needed to do and salvaged some points,” Cooper explained. “It was great to get that win in the first moto.

“I had a pretty good lead going, and then right at the top of the hill, I came into the rut, and it gave away, and I ended up going down. It was hard to regroup, but I put it behind me and kept riding forward to get the win.

“In the second moto, I just didn’t have the fight for those guys. It’s time to buckle down for these last three and make them count. Thanks to the team, they were awesome all day.”

With only six motos remaining, there’s still plenty of racing to go before we see who’s crowned champion, starting this Saturday, 28 August, at Ironman in Indiana.