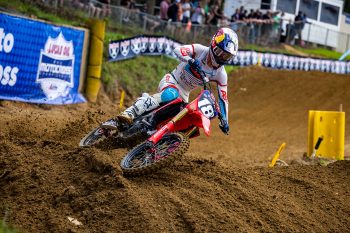 After closing the points gap to three at Budds Creek, Jett Lawrence has declared he’s going to ‘keep on fighting and give it all we got’ in the final six motos of the season.

Lawrence came into the ninth round of the Lucas Oil Pro Motocross season just four points behind Justin Cooper (Monster Energy Star Racing Yamaha) in the standings with four rounds to go.

“Budds Creek wasn’t too bad for us; it was an up and down race day, really,” Lawrence explained. “We ended with a good finish and we gained a point, but I’m a little bummed about the second moto.

“I got a really good start and was second, but I just had nothing to give after that. Basically, I went to go play poker and I had no money to put down [laughs]. That’s tough, but again, we gained a point.”

Despite a bit of frustration, Lawrence is hungrier than ever to bring the fight to Cooper in the three rounds that remain on the schedule.

“We’re still in this championship and just have to keep fighting to get some good motos in over these next three rounds.

Starts will be crucial for the Team Honda HRC rider as the series draws to a close. Currently, with 0 holeshots to Cooper’s nine, his average start position has been around seventh.

The series continues with round 10 this Saturday, 28 August, at Ironman in Indiana.