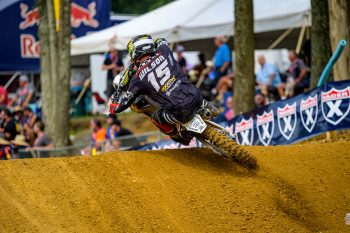 After overcoming illness and nagging injuries early in the season, Dean Wilson managed his best finish of the season at Budds Creek with eighth overall.

Wilson’s 2021 Lucas Oil Pro Motocross season was first marred by dealing with Epstein-Barr Virus, then by a massive crash in round four at RedBud.

Despite the issues, he’s hovered around the top 10 throughout the season in one of the more stacked fields we’ve seen in recent years.

At round nine last weekend, the Rockstar Energy Husqvarna rider grabbed his second top 10 of the season, with 8-9 moto scores giving him eighth overall on the day.

“My day was pretty good,” Wilson explained. “The first moto wasn’t too bad, it was very hot and I kind of struggled with the first half and then I got a decent flow for the second half.”

In the second moto, Wilson hit the ground in the opening corner. Forced to come through the pack, he still managed a top 10.

“Second moto, I fell in the first turn and I came from second-to-last up to ninth, so I was happy with that.

“I felt like I rode good and came through the pack well so we’ll take it, it’s building blocks and we’ll just try to get better every weekend.”

Wilson will have three more opportunities to improve, starting this Saturday, 28 August, when the series continues for round 10 at Ironman.