Tomac declares ‘no lack of motivation’ in quest to win 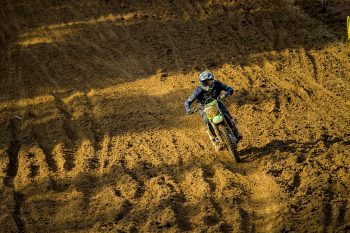 Following his fifth overall podium of the 2021 Pro Motocross season, Eli Tomac confirmed there’s ‘no lack of motivation’ to secure a win before the end of the season.

In his final season with the Monster Energy Kawasaki squad, Tomac has had ups and downs throughout the closing chapter. While he’s scored five overall podiums and three moto wins, he’s yet to notch an overall victory.

With three rounds left in the championship, three-time champion said he’s as hungry as ever for an overall victory.

“It was good to be at the front of the race, that’s for sure. Frustrated from moto one but was happy with riding in moto two. I’m scratching my head on how I haven’t got an overall yet.

“But yeah I had good second motos beforehand, then would always just underperform in moto one. We’re close right, but still getting beat.

“There’s no lack of motivation there. I’m searching for it, I mean we’ve got three to go and I think it’s very well possible. My starts were better and it’s going to be close. We’re close, I just need to get that first moto dialed in and then start in front of them in moto two.”

As for how his race went, Tomac was happy with his riding in the second moto, with first moto issues still hindering his shot at the overall win.

“Had a little bit of everything today. I had a couple good starts, then moto one was disappointing because I was there on the start and then just ended up getting passed. Got a little bit tight and was kind of riding around there in fourth the whole time. So that was disappointing, I knew I’d feel better in moto two, which I did, I rode better.

“Dylan and Kenny were in front of me, we were all going pretty close to the same speed. We all kind of bunched up at one point and were there, but nothing really happened for my situation. Happy with the riding in moto two, it was okay ya know, just still looking for that win.”