Extensive pain spells end of Plessinger in moto one 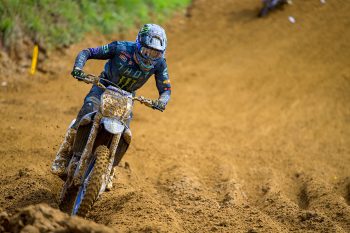 Extensive pain ended Aaron Plessinger’s return to action in the opening moto at Budds Creek, as he attempted to race just one week after his crash at Unadilla.

The Monster Energy Star Racing Yamaha rider elected to return for round nine of the Lucas Oil Pro Motocross season, despite suffering a bruised lung and liver in the incident a week earlier.

After qualifying eighth, Plessinger lined up and ran as high as seventh in the opening moto before extensive pain forced him to retire just past the halfway point.

“We were going pretty good in qualifying and in that first moto,” Plessinger explained. “I really tried to grit my way through it today, but I was just too sore from last week’s big crash.

“We’re going to keep working on some therapy this week and will try again at Ironman.”

After scoring no points in the last four motos, Plessinger now sits ninth in the overall standings as the series heads to Ironman this Saturday 28 August.