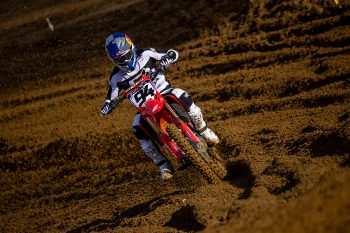 Team Honda HRC rider Ken Roczen admits that bike settings were an issue as he battled for the win at Budds Creek.

Roczen came out swinging at the ninth round of the Lucas Oil Pro Motocross Championship as he looked to take his second overall win on the trot after a dominant performance at Unadilla.

Following the race, Roczen said a struggle with bike settings and a lack of stability were an issue as he attempted to gain more points on Ferrandis in the championship.

“When you’re not really feeling that comfortable, it wears you out a lot more,” Roczen explained. “I felt like in both motos I really had to muscle the bike around to be able to go the speed that we went.

“You know, of course, that makes it tougher toward the end of the moto. So we’re definitely just trying to make the bike better and make it easier on ourselves as well so we don’t have to force things so much.

“I struggled, especially today, with being precise, just because my bike was bouncing all over the place. So I had to leave a few tenths in certain spots.

“So I wasn’t too happy about that but we have to try and do as good as possible and when we’re already in such a good position, it comes down to some grit.

Roczen’s teammate Chase Sexton also expressed his frustration with settings late in the motos, with Roczen confirming they’re complaining about the same issue, then elaborating on what they’ve been up against during the pandemic.

“I definitely think we’re complaining about the same time,” he continued. “It’s been a bit of a struggle, in general, this year just because due to covid, the suspension ship outs, it just sometimes doesn’t show up when we need it to.

So I have not really been testing at all and I’ve been on the same setup for quite a while. I made some bigger stabs at it clicker-wise, basically, in the first moto I rode the exact same bike as I did in Unadilla, but I didn’t like it nearly as much.

“It wasn’t ideal there either, but I definitely struggled with it more today. Then obviously the track, certain areas are deeper and you have rutty sections and that really pulls the bike down. Having the bumps in the ruts too, they’re pretty quickly in a row, I definitely feel like I had not enough stability there.

“So it’s a difficult situation to be in, because if we were to be in California, we could test and do that kind of stuff, but being in Florida I’ve just been sticking with what I have and yeah, try to muscle my way through at this point.”

While he managed to get away from Budds Creek without losing any points on Ferrandis, the window is closing to cut the 39-point gap with just six motos left in the season.